How to Name An Airstream and Tow Vehicle 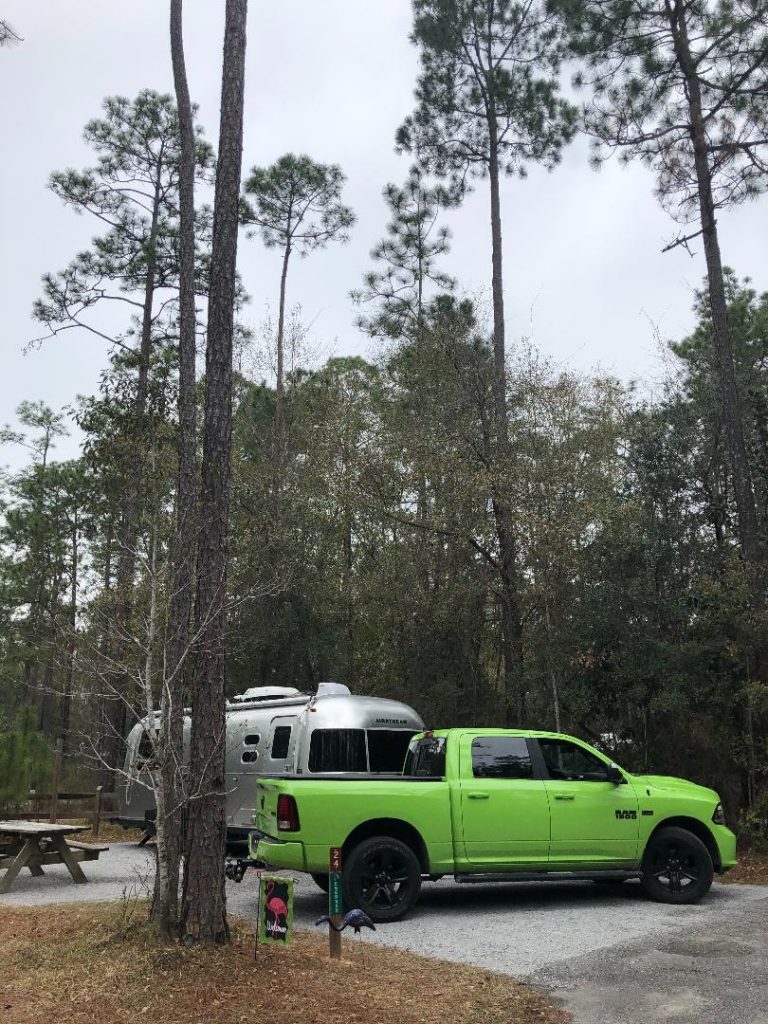 Like many full time travelers, I named my truck and travel trailer.   Veronica, my Airstream, is a 25 foot Flying Cloud of shiny aluminum and panoramic windows.  Bruce, my neon green truck that pulls the trailer, is a RAM 1500 4×4 with a 5.7 Hemi.

I purchased Bruce first, back in June 2018.  After careful research, I had figured out the towing capacity and features I would need to pull the size trailer I hoped to purchase.  What I didn’t expect is how hard it would be to find a used truck meeting my requirements that did not smell like smoke.

I test-drove used and new trucks over the course of a few weeks and carefully read online comments about tow vehicles.  The road feel and comfort of the RAM and the GMC trucks appealed to me.  I had no particular preference on color, other than wanting to avoid black so the vehicle would be more visible.

Little did I know that visibility was not going to be an issue.

The bright green truck I ultimately purchased on my fifth trip to CarMax caught my eye right away.  Since the window sticker indicated low mileage and the necessary towing features, I opened the door and cautiously took a breath.  Success!  This one actually smelled like a new vehicle, without a hint of smoke.  Plus, it had every towing feature I wanted, even items that I thought I’d have to add myself like a convenient handle and step.

I took some photos and sent them to my daughters.  My youngest texted back “Mom, that is a tricked out truck (referring to the oversized black tires and rims, black stripe on the hood, and the sunroof).  Buy it!”  My oldest texted “You can’t buy that.  It is too green and too big…it’s the Hulk!”

The green RAM drove like it was made for me.  It was only a 2017 with nearly 20,000 miles left on the original warranty.  The color started to grow on me as I sat in the truck for a while.  Inspired by my daughers’ comments, I bought the green truck and named it Bruce (for Bruce Banner, the scientist in the Marvel Universe that turns into the Incredible Hulk).

Bruce played an important role in the purchase of my Airstream.  Airstream trailers look essentially the same as they did in the 1930s when they first were produced at the original factory in Jackson Center, OH.  The same factory, fondly called “the mothership” by Airstream aficianados, continues to be the sole source of new Airstreams.  They are still primarily assembled by hand, including the many rivets that dot the aluminum shell evocative of an airplane or spaceship.  The differences within a particular line such as the Flying Cloud model are in the optional features, location of the bedroom, and the colors of upholstery and countertops.

I’d spent time shopping to select the right Airstream for me, but could not find one in stock with all my favorite choices as I called Airstream dealerships up and down the East Coast.  It looked like I’d have a four to six month wait to order it from the factory.  Then, I talked with a salesperson at Airstream of South Florida in Fort Myers.  “Your Airstream just came on our lot last week,” he exclaimed after I read my list of must-haves.  I obtained a quote and asked for the salesperson’s name.  It was…Bruce!  If I needed another gentle sign that I was on the right path, this was it.

The important task of naming my Airstream required consultation with friends.  Fortunately, I am part of a group on Facebook that follows the Marvel universe stories intently.  Betty (Bruce Banner’s first romantic interest), Natasha (the “Black Widow” ex-agent who follows the Hulk around for a while), and Veronica (the satellite-launched shiny metal hull designed to contain the Hulk if he gets too unruly) were suggested.   Betty and variations like Tin Lizzie was a common name for Airsteams.  Natasha sounded too Russian for an American icon.  One of my non-Marvel fan friends pointed out that Veronica means True Icon in Latin, so the choice was clear.