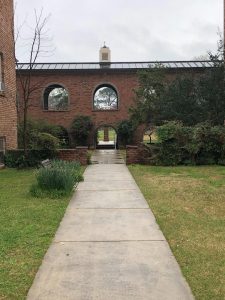 Christ the King Monastery in Cullman, Alabama offers Latin Mass in the Extraordinary Form just a short drive from the Shrine of the Most Blessed Sacrament.  As celebrated by the monks of the Contemplatives of the Pierced Hearts of Jesus and Mary, this was a beautiful and reverent liturgy.  As my first experience participating in a High Mass, I found it easy to follow thanks to the missal and page by page translation.

What I didn’t expect was the mysterious and solemn beauty of this version of Mass.  It was more contemplative, filled with silences in which the priest prayed quietly at the altar with his back to the congregation.  The music was…well, for lack of a better word, otherworldly.  The monks raised perfectly pitched voices in unison in chant.  This musical tradition adds to the richness of experience in the liturgy.  The Novus Order Mass, with which most Catholics are familiar, is more actively engaging, especially for following along and understanding the readings, yet it can sometimes become less directed at the mystery and worship of the True Presence of Our Lord depending on the selection of music, how the lectors read, and the nature of the homily.  For example, when a Novus Order Mass includes a homily involving a walk among the audience with a headset, it can drift into focusing too much on the priest’s wandering around instead of the meaning of the readings.  In any event, if you have a chance to participate in a Latin Mass in the Extraordinary Form, such as that offered at Christ the King Monastery, I think you’ll find it enriches your appreciation and understanding of the Catholic faith. 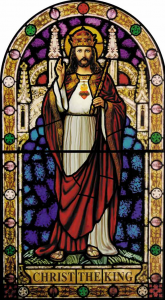 The monastery is near other shrines in northeast Alabama, including St.  Bernard’s Abbey and the Shrine of the Most Blessed Sacrament.  It was built in the early 1980s by Benedictine Father Leo Giardina, who formerly was a monk at St. Bernard’s Abbey.  Father Leo separated himself and his new community from the local diocese and functioned outside the Catholic Church for a period of time.  After his death, the monks completed a process of reconciliation with the Diocese of Birmingham.  Currently, Catholic pilgrims may earn a plenary indulgence under the Diocesan Year of St. Joseph until May 1, 2019 by reciting prayers in devotion to St. Joseph along with the usual conditions.  Highlights within the church include an extensive collection of relics, including a splinter from the True Cross, and beautiful Gothic style stained glass windows created by the local Bovard Studio.