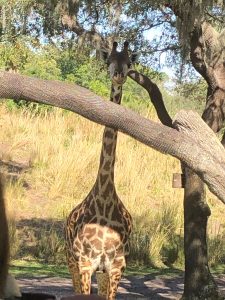 You never know who your neighbors will be in an RV campsite, but almost always they are friendly. A very nice extended family pulled in next to me a couple days before I left Lake Guntersville State Park in Alabama. They had a great cooking contraption, a multi-level grill with warming space, that fit over the fire pit so a lot of food could be cooked at once and kept warm on the edges. Grandparents, children, and grandchildren clearly were enjoying their family time together, with lots of little ones drawing with chalk, riding their bicycles, and exploring the park.

One mom saw me walking Penny as her fearless toddler made a beeline for my small dog. We got to chatting about her work in the pro-life movement, while the kids watched me rub Penny’s belly as she does not like to be approached by strangers, even small ones.

The grandparents also introduced themselves and invited me over for a meal one night. I was talking with the grandma when she received a call from a daughter who goes to Corpus Christi parish near Cullman. Her daughter invited her to attend a screening of the movie “Unplanned” the following night as the parish had purchased a block of tickets to provide free to parishioners. Grandma couldn’t go, but she remembered I’d commented that I was leaving the next day to camp at a nearby park and asked me if I’d like a free ticket. I said sure, and she said she’d call her daughter back and let her know. She told me to just show up at the AMC theatre in Cullman and look for the group.

I almost didn’t follow through because I was tired from hitching, towing, and unhitching my rig. Yet, I really wanted to support the movie, and figured if I went once for free I could go again and pay on the weekend.

When I got to the theatre, I looked for the church group. A woman wearing a white cross necklace was standing at the entrance holding a sheaf of papers. We made eye contact. She asked if I was there for the premiere? I said yes, that I’d been at Lake Guntersville and met a couple who told me about the movie and had family at Corpus Christi parish. She said “oh, you mean the Shields.” “Yes, did someone call and put my name on a list?” “Oh, no, but that’s fine,” she smiled, “I just happen to know they’re at Lake Guntersville this week.” She gave me the ticket and I went in.

I picked a seat at random, next to two women. During the ads and previews, the woman to my right introduced herself. We started talking and realized that we both had lived in Northern Virginia. I mentioned I’d worked at a pro-life medical practice, and she asked if that was the one headed by Dr. John Bruchalski as he’d delivered several of her children. We were surprised to find we both had children delivered by Dr. Bruchalski decades ago, two in the same year! We chatted and I explained my blog about living full time in an Airstream as a pilgrim.

After the movie she gave me her name and number to get in touch so we could talk more about living as a nomad. Turns out she has been thinking about purchasing an RV and working from it. She’s about to embark on a new stage of life, just as I did.

God surprises me all the time with an unlikely series of coincidences that lead me to just where I should be. That’s part of what my journey is about – not just visiting shrines and religious sites, but having Him bring people into my life that I may have a chance to befriend or help in some small way.