Canoe Tips Over in the Everglades 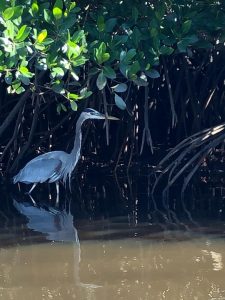 One of the most beautiful and peaceful experiences I’ve had so far is canoeing in the dark in the Everglades. Collier-Seminole State Park has a guided canoe trip at night once a month. Gliding through the mangrove lined swamp with a full moon reflecting off the ripples in the water lets your imagination run wild. You imagine yourself as an explorer, alone in the wilderness even though the glowsticks attached to the sterns of the other canoes twinkle in the distance.

I enjoyed this two hour canoe trip so much that I signed up for the daytime one the next morning. This also was an amazing experience, although not entirely in the way I anticipated.  I was able to take many close-up photos of birds.   The still, dark water reflected the brilliant blue sky, the tangled brown mangrove branches and other lush green foliage as we paddled through narrow winding waterways that occasionally opened into larger pools.  Along the way, roots or “knees” and the occasional larger branch gave us lots of practice navigating around them. 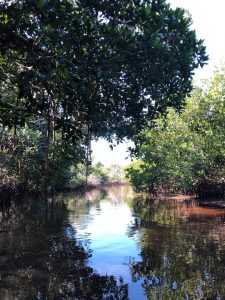 The morning canoe group was much larger.  The guides gave the same safety presentation as they had at night, focusing on the key rule of “do not lean” out of the canoe, along with its “do not stand up” corollary.  As a precaution, the guests all donned bright orange life vests.  One of the guides was my partner in the two-person canoe.  He took the back steering spot, designated for the person with more experience.

Equipped with our paddles we embarked off the shore, while a sleepy alligator watched from the opposite side.  We followed a creek through mangroves, most of us heeding the advice to not lean but push off on the mangroves if we drifted into shore.  The rangers pointed out a variety of ibis and heron.  Little crabs skittered along the branches, but I didn’t see any snakes or more alligators.

This turned out to be a very good thing.

Only ten minutes into our adventure, several canoes became enmeshed in the mangroves.  My canoe partner called out instructions.  He mentioned as an aside to me that he’d only had three people ever fall out of a canoe in over seventy trips.  No sooner did he speak when a middle aged couple — visibly nervous about the whole canoe trip from the outset — made the mistake of leaning over to grab at branches so they wouldn’t drift into the clump of canoes.  Over they went!

Sputtering, the woman did the classic rescue float supported by her life vest.  My canoe partner immediately leapt into the water to help her, dumping our canoe in the process.  So, there I was in the solid murky black water of the Everglades.  It was only three and half feet deep as soon as I got my feet under me and stood, but I couldn’t see more than an inch into it.  I grabbed my sunglasses quickly before they disappeared beneath the murk.

My erstwhile canoe partner was very apologetic.  He sheepishly explained that he just acted on instinct, not realizing he could have told the floating woman who didn’t swim to simply stand up.  Meanwhile, remembering that alligators don’t really want to eat people, but might not be happy if you stepped on them, I shuffled over to the swamped couple without lifting my feet.  God looks after the smallest detail in our lives, I reflected, and the group certainly had made enough noise that no respectable alligator or snake would hang around.  Although the water was smelly, it actually felt cool and refreshing in the hot sun.  I helped the guide drain and right their upside down canoe.  Another guide hopped out of his kayak and we righted my canoe.

I stepped back inside gingerly while he held the canoe.   My original partner got back in and we continued the three hour trip, rather pungently since the black water had a unique earthy aroma due to all the decaying foliage and other things I’d rather not think about. 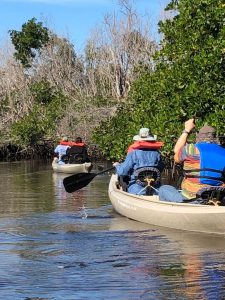 Later, it took three cycles through the washing machine to de-swampify my clothes and sneakers.  I became something of a minor temporary celebrity among the rangers because I didn’t get angry and yell at the poor guide as they apparently had expected.  It is a fruit of regular prayer to find joy in all situations, even an unexpected dunk in the Everglades.  Besides, the guide was thoroughly ribbed by his colleagues.

I wish I could have given my joy to the drenched couple who were loudly squabbling over which one had caused their canoe to tip.  They found no humor in the situation and opted to return to the landing with one of the guides.  They left my guide with the legacy of doubling the number of clients who’d gone into the water on one of his trips.  They left me with an unusual experience of swimming in the Everglades and an opportunity to trust that God would keep me safe.