Pilgrimage to Miami’s National Shrine of Our Lady of Charity 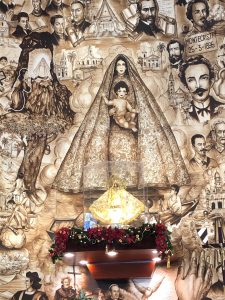 A priest on Marco Island, FL recommended a visit to Miami’s National Shrine of Our Lady of Charity.  It was well worth the drive through the Everglades from Marco Island.  Built in the 1950s by Cuban exiles, this shrine has great historic and religious significance.

Our Lady of Charity is the Cuban incarnation of Mary, Mother of Jesus.  Over 400 years ago, fishermen found a statue floating off the coast of Cuba on a board with a sign on which was written “I am the Virgin of Charity.”  The image was taken to several parishes on land, but each time vanished and returned to a spot on a hill near El Cobre.  A small hermitage was built there where the image resided.  In 1916 Pope Benedict XV proclaimed Her the Patroness of Cuba, and Pope John Paul II crowned Her when he visited Cuba in 1998.

Miami’s shrine contains an amazing mural of the Cuban landscape, Cuban martyrs, and historic figures surrounding centered around Mary, Our Lady of Charity.  Her statue rests on the altar and a plaque to the side of the altar also commemorates this image.  The artist Teok Carrasco created the altar mural.  A fascinating brochure available at the Shrine explains all the elements and depictions of Cuban figures and sites, from Turquino Peak at the top to the fishermen under Mary’s feet.  Among the martyrs and historic persons are heroes of Cuban’s War of Independence and priests killed or exiled for preaching the Gospel.  An online description of  this work of art and the individuals depicted is available at the Shrine’s website.

Outside, you can wander around the grounds for a scenic view of Miami over Biscayne Bay.  A small shop sells snacks and benches generously are scattered along the seawall area.  Colorful tile murals include depictions of Saint John Paul II, Archbishop Carroll of Miami who encouraged building of the chapel,  and Monsignor Augustin Roman, the first Cuban-born Bishop in the United States and founder of the Shrine.  Monsignor Roman’s statue also is found outdoors, as well as other sculptures and monuments.  A simple sign with a prayer asking 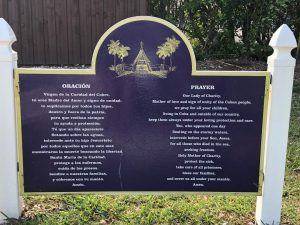 for Our Lady of Charity’s intercession in Spanish and English provides a fitting end to this day of pilgrimage.  I left with a strong sense of how Cuban exiles had turned great loss into great beauty through their devotion to Our Lady of Charity.  Their boats drifting on the ocean, in trust of finding a new home, will remind me now of the image of the Virgin drifting in the water off Cuba’s shore.