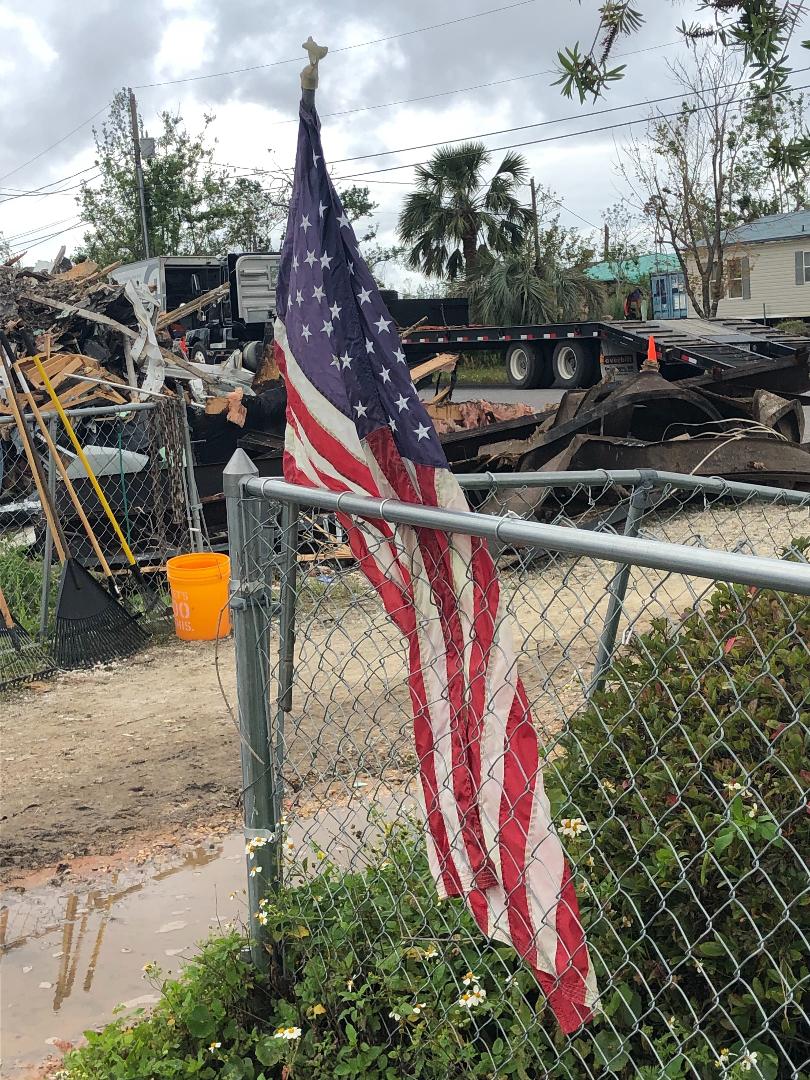 Nancy’s smile was tentative.  Her family had survived Hurricane Michael by sheltering at a nearby relative’s home.  Her son’s home had not survived.  It had collapsed into a heap of twisted siding, steel beams, clothing and children’s toys.  For six months, Nancy had been living next to this huge pile of rusty metal and rotting furniture as her own home was repaired.  Today, a crowd of people in bright orange shirts gathered at the property to help.

In the wake of last year’s Hurricane Michael, vast areas of the Florida Panhandle remain devastated.  People feel that the outside world has forgotten them as time passes and new disasters claim public attention.

Samaritan’s Purse has not forgotten.  A disaster response organization and Christian outreach ministry, Samaritan’s Purse is a mainly volunteer operation with a small staff.  It witnesses to Christ’s love through the work of volunteers and ministers to survivors of disasters through response and reconstruction work.  Chaplains from Billy Graham’s ministry provide spiritual support and outreach to volunteers and homeowners.   Those served by Samaritan’s Purse receive the labor of eager volunteers, their heartfelt prayers, and a study Bible signed by volunteers who worked on their property.  Relief and rebuild efforts occur in both U.S. and international locations.

I found out about Samaritan’s Purse through a friend who was organizing a mission trip to Panama City.  Several other relief organizations also are active there long after the hurricane, including Catholic Charities of Northwest Florida  and the Catholic Diocese of Pensacola-Tallahassee.  I chose Samaritan’s Purse because it was easy to volunteer as an individual rather than part of a larger group.

What prompted me to add my small efforts to those of other volunteers was the vastness of the destruction and the magnitude of the unaddressed needs.  As I towed my Airstream along Route 10, I was shocked to see the scope of the storm’s devastation.  It looked like powerful bombs had gone off.  Acres of trees were shattered with jagged broken trunks like smashed teeth in surprisingly symmetrical patterns.  Later I learned the tearing of these tall trunks at the same level indicated the path of one of the many tornadoes that accompanied Hurricane Michael.  Many houses gaped open or sported bright blue tarps.  For more than a hundred miles, west from Tallahassee, through Marianna and Chipley, and then down along the coast to Panama City, I witnessed the terrible, widespread effects of last October’s pounding of the Panhandle. 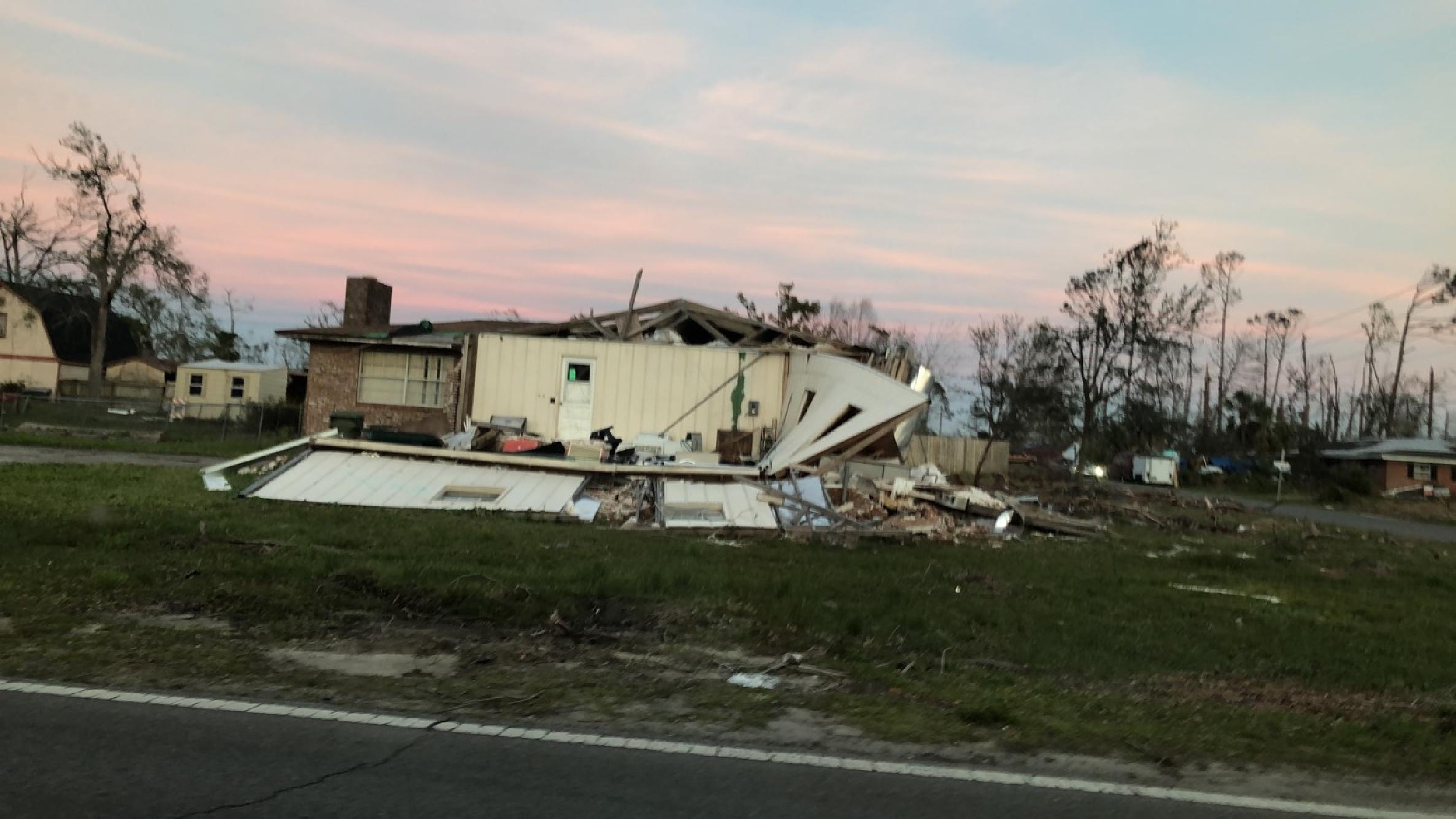 For over 40 years, Samaritan’s Purse has provided relief and rebuild efforts after natural disasters. It usually works with local churches to house and feed overnight volunteers. Day volunteers are welcome as well. I worked several mornings and an afternoon shift at the Panama City operation while staying at a state park about an hour north. A few weeks later, I parked my Airstream at an empty lot next to the church hosting the volunteers and joined them as an overnight volunteer for six days. I truly enjoyed the camaraderie among people from all over the country – and Canada – there with family, friends, or on their own, like me, all for a common purpose. 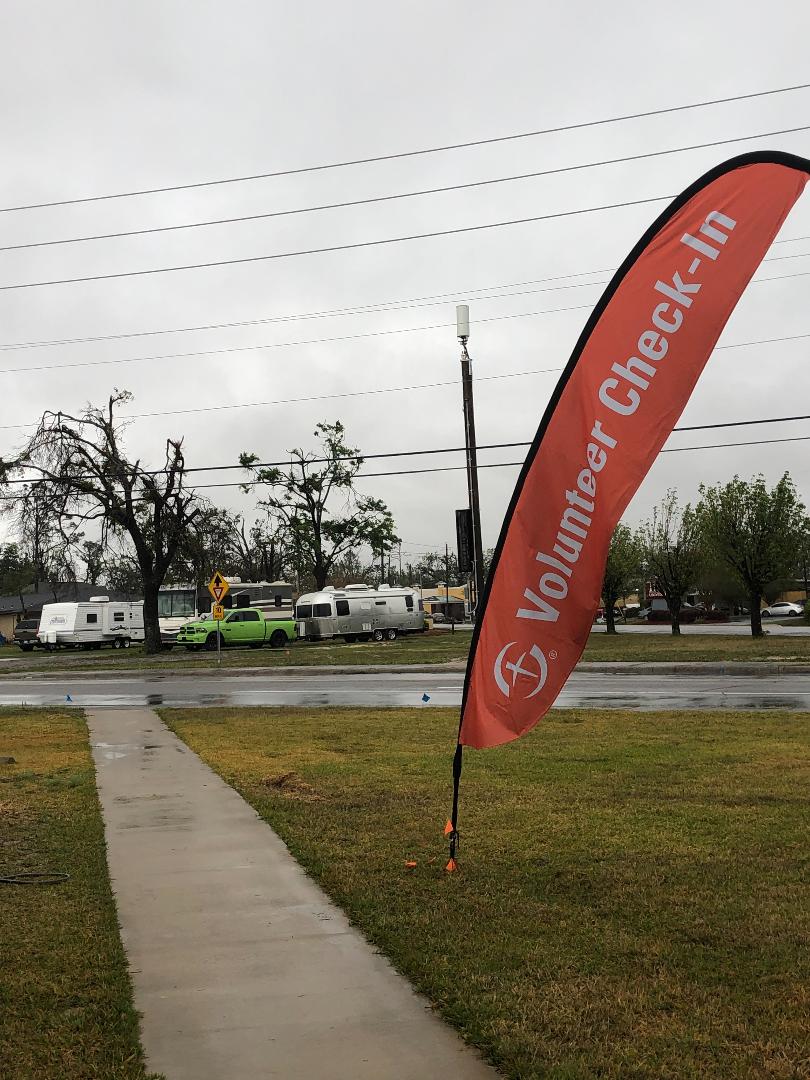 Samaritan’s Purse takes its motto “go and do likewise” from the Gospel parable of the Good Samaritan who cared for an injured man when others walked by without stopping to help. Integral to the material assistance Samaritan Purse provides is the sharing of the Gospel. The organization seeks to share God’s love through His Son, Jesus Christ. As a nondenominational evangelical Christian organization, Samaritan’s Purse looks for volunteers who have the same outlook and asks them to review and agree to support its ministry guidelines.  None of these contradicted Catholic beliefs.  I felt welcome as a Catholic who prays with the sign of the cross and attends daily Mass.

Our days began at six a.m. with preparation of bagged lunches followed by breakfast. Orientation and training for new volunteers took place every morning and afternoon. An inspiring and informative video was followed by a talk from a safety coordinator answering questions and giving site-specific tips. By the end of my time, an experience I had on my second day became part of the cautionary safety tips (read my blog entry Scorpion Socks for more details!). 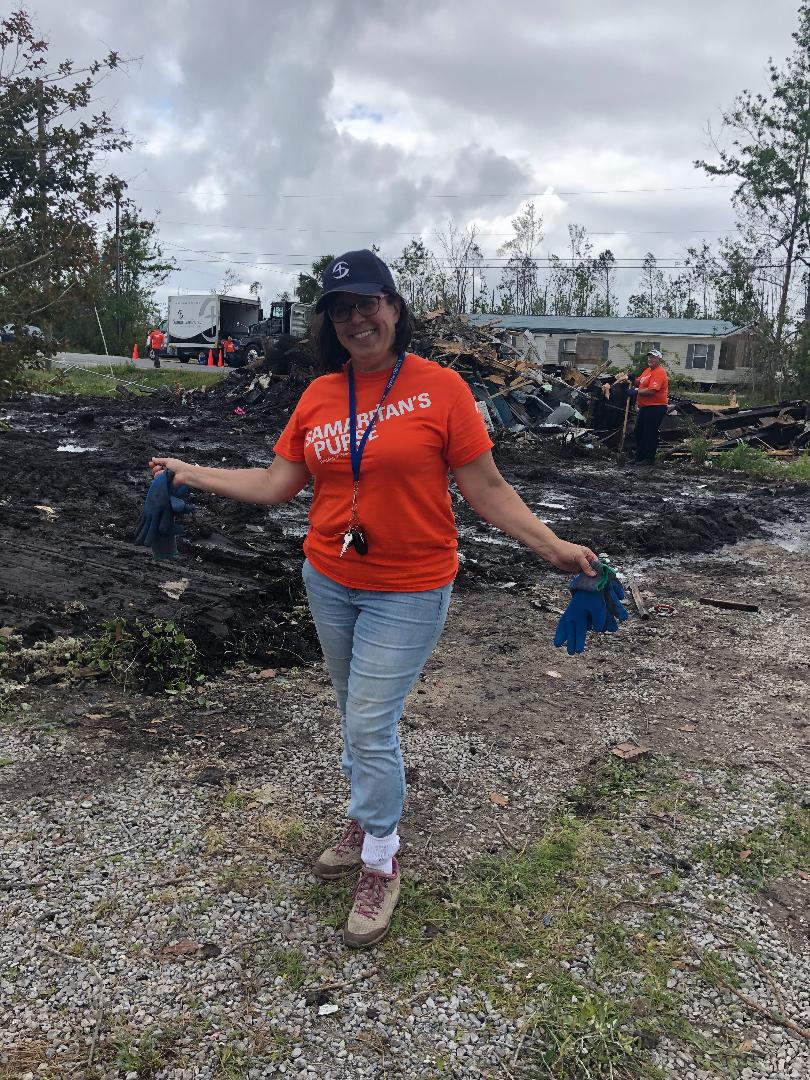 Each morning the teams of workers prayed with each other before setting out for the day. We also prayed with the homeowner when arriving at a job site and when finishing up work at a job site. In addition to prayers at meals, a couple of evenings per week there were self-led devotions available. I did not participate in those as it was the only time I had to get to Mass or pray my daily Rosary. I generally was so tired from the physical labor that I went to sleep around 8:30 pm.

In the evening after dinner, while all are still gathered at the common tables, homeowners and volunteers speak about how God touched them during the day. Homeowners tearfully expressed their gratitude, some saying how difficult it was to be recipients of aid when they had always been the givers. Others talked about how much hope it gave them just to know that volunteers cared. One woman spoke of the joy which shone forth from the volunteers as they did the hard manual labor needed to clear her yard of fallen trees and debris. All echoed what the chaplains and crew leaders told us…that we were being the hands and feet of Christ. 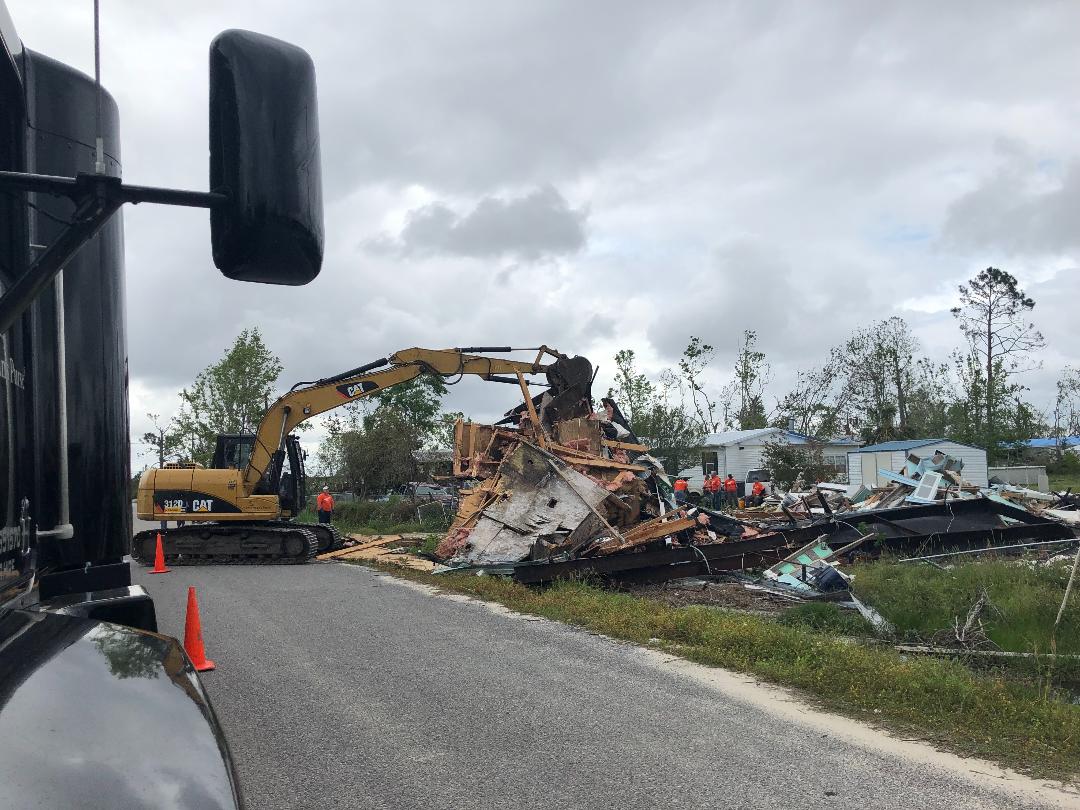 The work was physically challenging but very rewarding. Teams of orange-shirted volunteers would arrive at a site en mass. The team leaders then conferred with the homeowner to make sure all were on the same page regarding the homeowner’s needs and the work to be done. One or two volunteers would keep the homeowner company, as a friendly ear to listen if the person wanted to talk about the traumatic disaster that led to the need for volunteer assistance. They also were open to sharing their faith in Jesus if the homeowner was receptive.

Meanwhile, like a busy swarm of bright orange ants, the rest of the workers completed the debris clearing, mudout, roof tarping, or other project needed. Blue-shirted chaplains from the Billy Graham Rapid Response Team visited the job sites and were available to minister both to volunteers and homeowners.  Everyone was encouraged to do all aspects of their jobs well, even the smallest jobs of picking up handfuls of insulation or raking clean a yard once massive tree trunks were removed.  Each part of the debris clearing was work done for God.

Currently, Samaritan’s Purse has ongoing projects in Alabama, Nebraska, North Carolina, South Carolina, Alaska, Florida, Texas, Mozambique, and Saipan. If you are looking for an exceptional and well-organized volunteer experience, where people freely and unabashedly proclaim their love for Jesus and their neighbors by their actions and words, you should consider volunteering with them. You can learn more and contact Samaritan’s Purse here. Expect a transformative experience both for you and those you will serve.  Love given for Christ’s sake transforms the giver as much as the recipient.