I came back to the Catholic Church during the papacy of Saint John Paul II.  My personal journey home was marked by signposts that included the Splendor of Truth and others of his many encyclicals.  On a pilgrimage to Rome in 2004, I  attended a Wednesday audience where, bent and whispering, Pope John Paul II still served the Church as a shepherd in the midst of his suffering.

These experiences have made me particularly fond of sites dedicated to him.  I was very pleased to find the John Paul II Eucharistic Center during my visit to the Shrine of the Most Blessed Sacrament in Hanceville, Alabama.

What a richly textured exhibit this would prove to be!  I ended up spending an entire afternoon and did not even watch all the videos discussed below.

Tours of the Center occur twice a day.  The tour is a good introduction to Catholicism for someone who is not Catholic as well as a refresher for Catholics of the very foundations of our faith. The exhibits reveal the Eucharist in sacred Scripture and in the life of the Church.

A sacristan brought us into a large entry room. There, a true-to-size model of the monstrance used in the Shrine made us appreciate how large the seven foot tall monstrance is. After a short film about John Paul II, we entered the first of a series of rooms devoted to the Eucharist.

The guide invited us to place ourselves into the audience at the synagogue in Capernum where Jesus spoke to a people prepared and waiting for the Messiah.  Just the day before, Jesus had taught in the wilderness, broke loaves, and distributed bread and fish so everyone could eat. This pre-figurement of the Eucharist took place before a crowd, some of which then met Jesus in the synagogue the following day.  A film projected into this model of the synagogue presents a life-size Jesus speaking to us.  Hearing the words of John 6 being spoken by Jesus drives home the radical nature of what he says.  Nearly all the crowd who saw the miracle of the loaves the day before walk away when Jesus says he is from Heaven and promises them eternal life if they eat his flesh and drink his blood.

As we walk to the next room, we see The Fountain of Life sculpture. The bubbling fountain depicts the living water and the lamb who was slain from John 4 and Revelation 5.  The image of a lamb on an altar that is really a mountain, explains our guide, from which water flows to call us to closer relationship with our Lord and God.

The next room depicts Abraham and Isaac. God asks for trust in our willingness to give to Him even what we value the most. Faith looks like obedience. Thus, we learn that Jesus and the cross was prefigured in Genesis when Abraham was willing to sacrifice his only and beloved son. God rewarded Abraham’s obedience and provided the sacrificial ram instead of allowing the death of Isaac.

Another room replicates a Jewish home during slavery in Egypt. The blood of the lamb marks the wooden lintel and doorposts of the home’s door. Our tour guide reminds us that anyone who commits sin is a slave to sin and that we cannot save ourselves. Our desire to be delivered from slavery leads us to cry out to God who comes to save us, as He did the enslaved Jews. By the sacrifice of something very valuable, an unblemished pure white lamb, God through Moses directed the Jews to mark their homes with the blood of the lamb and eat the lamb.  He saved them from death by a meal and sacrifice. He then rescues them from slavery and takes them to receive their own land. An everlasting covenant remembered at the same time every year…sounds familiar in our experience of the Mass.  The guide stresses that the Scriptures — both Old Testament and New Testament — are about relationship, about God coming to us to save us. 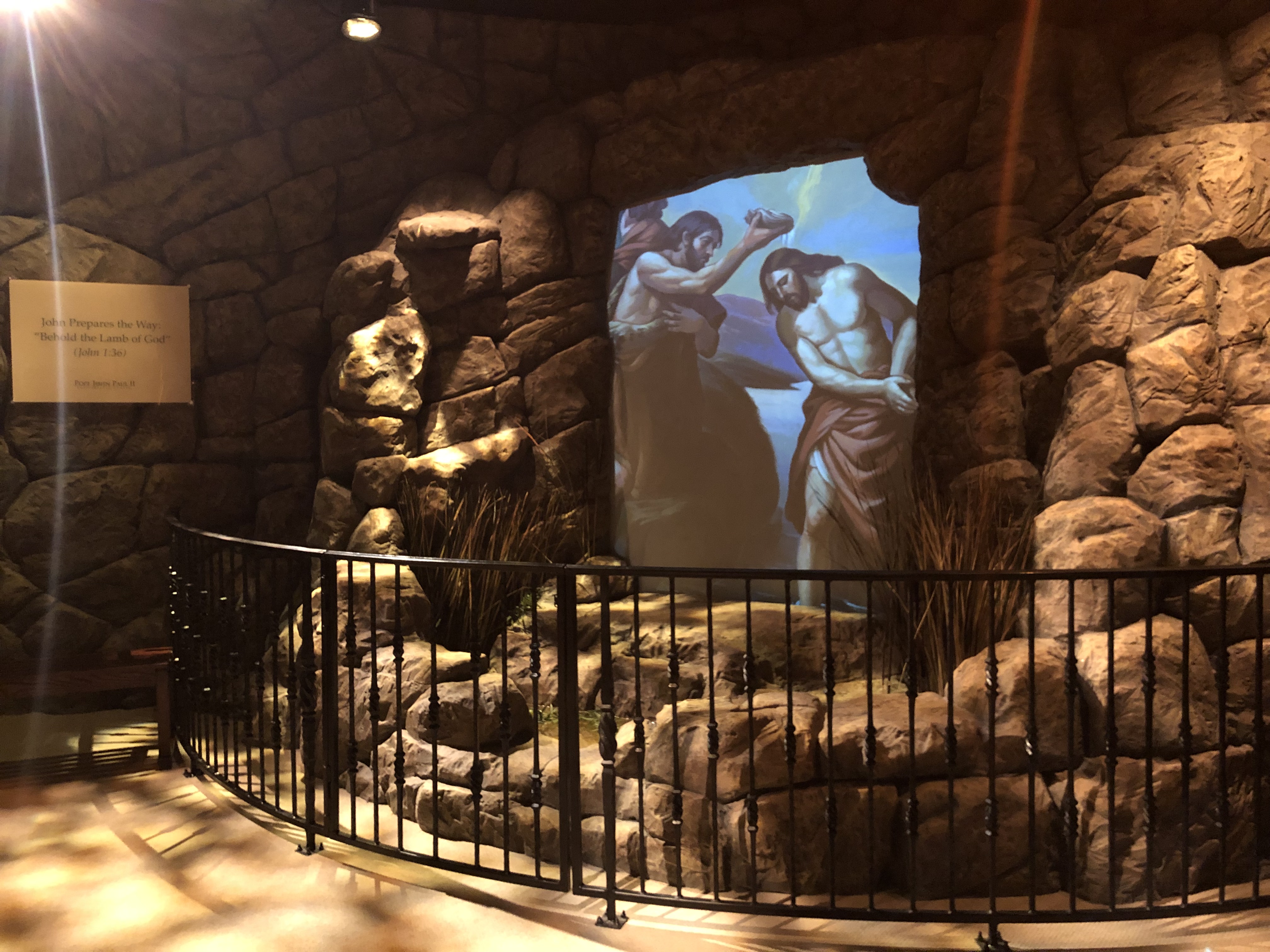 The next tableau presents Jesus being baptized by John the Baptist. A projected image of John recounts the experience to us.  As we hear the words “Behold the Lamb of God…This is the Son of God,” our guide adds that it was the custom for pilgrims to Jerusalem to wash their lambs in the Jordan before taking them to be sacrificed.

The Last Supper room is shown to us on the day of the Passover. Jesus has sent Peter and John to prepare for the meal. As the familiar words “do this in remembrance of me” are said, we recognize them as an invitation to walk with Jesus, to enter with Him into the cross. The guide tells us this is the Good News: God is infinitely blessed and happy. He freely creates us to share in His blessed life, in His joy. God could not give us anything greater than this – a share in Himself. The Good News is that we are made for God.

The final room depicts a priest offering the Eucharist at an altar (ad orientum, by the way). The Mass is shown as how we keep the commandment Jesus gave us to “do this in memory of me.”

This section of the tour concludes with a film in which Brother Joseph and Mother Angelica bless the pilgrims. Three Eucharistic miracles are presented in which those having doubts or rejecting the Real Presence of Christ in the Eucharistic received a response in which its true form was revealed.

Next, we enter an interactive media area.  A children’s area will entertain and educate the little ones.  Adults and older children can walk through curtained booths in which the words of saints about the Eucharist are presented in film clips.  These were startling and fascinating as actors and actresses portraying the saints look at and speak to the viewer directly.  St. Jean Vianney, St. Gertrude of Helfa, St. Augustine and many others are portrayed.

Other areas contained questions and answers about the Eucharist.  The Center includes a display of quotes from Mother Angelica, statues of Eucharistic Martyrs, and icons illustrating Eucharistic miracles.  These icons were written by the same artist, Gloria Thomas, who designed the crucifix in St. Bernard’s Abbey.

The well-done tour and interactive exhibits can easily take the whole afternoon or morning if thoroughly explored. Definitely make some time for the John Paul II Eucharistic Center if you visit the Shrine. It will give you a deeper understanding and appreciation of the great gift God has provided in the Eucharist to help us enter into His life.