In a quiet suburb of Birmingham, Alabama, you’ll find a fruitful place to visit at the Eternal Word Television Network (EWTN).  Tucked away to one side, the monastery of the Franciscan Missionaries of the Eternal Word provides a home for the brothers.  Within the main building, the beautiful Our Lady of the Angels Chapel invites reflection.  Indeed, angels — both depictions and real — clearly inspire all who explore the quiet, leafy site on Irondale Road.

The monastery, chapel, and television studio were built by Mother Mary Angelica in obedience to divine inspirations.   Raymond Arroyo’s excellent book about Mother’s life provides many details about how Rita Rizzo came to be familiar to millions around the world as Mother Angelica.   The EWTN website describes milestones of her life.

When she was only 19, Rita entered religious life with the Poor Clares and took the name Mary Angelica.  Suffering poor health, she injured her back severely and promised the Lord that if He would heal her sufficiently to stay in the order, she would build a monastery in the South to encourage vocations from African Americans to the religious life.

He did, and she did.

The Monastery and Shrine

Mother built Our Lady of the Angels monastery and founded a contemplative community of nuns in Irondale, a suburb of Birmingham, AL.  The Poor Clares of the Holy Eucharist later moved to Hanceville as EWTN expanded and a community of friars formed in Irondale to support it.  Mother Angelica began recording evangelical talks and producing pamphlets, later expanding into television and radio interviews.  You can read more about her inspiration to found the Hanceville Shrine in my post about The Shrine of the Blessed Sacrament.

In 1978 Mother Angelica had the inspiration to build a television studio. Her goal was to reach more souls with the Gospel.  Three years later, EWTN was launched in the garage of the Monastery, broadcasting for about four hours per day. By 1987, EWTN was a 24 hour cable network.  It became global in 1992 and today reaches anyone with a 3 meter satellite dish.

Our tour guide, Cristi, worked with Mother Angelica for many years.  She explained that in addition to ongoing issues with her back, Mother suffered two strokes.  The second was severe and led to her return to cloistered life.  She offered all her suffering for the success of EWTN, and it bore great fruit.  She entered eternal life on Easter Sunday, March 27, 2016.

Cristi shared inspiring events with us as she brought us to the set and to Mother Angelica’s modest office.

In January 1998, an Italian visionary visited EWTN in Alabama, because Our Lady told her to help Mother Angelica.  She and Mother Angelica prayed the Rosary together in Mother’s office.  Our Lady appeared halfway through the prayer.  She told the visionary to tell Mother to take off her leg braces.  When Mother Angelica took off the braces, she felts warmth, straightened up and walked out to the studio.

News of the miracle quickly spread throughout the community.  The visionary prayed the Rosary with others who came to see her.  That night, Cristi prayed the Rosary in the chapel where there was an aroma of roses even though roses were not present.

Our guide related another famous intervention of God’s grace to support EWTN.  Mother’s first satellite dish was delivered COD.  The driver couldn’t unload it without payment and Mother did not have the money.  She went to the chapel and asked the nuns to pray.

While they were at prayer, someone telephoned from a yacht and insisted on speaking with Mother Angelica.  He told Mother that reading pamphlets she’d written about faith saved him from suicide.  In thanksgiving, he asked how he could help her with money.  She told him how much she needed for the satellite dish and that she needed it now.  He wired the funds immediately.  The driver unloaded the dish, and EWTN was up and running. 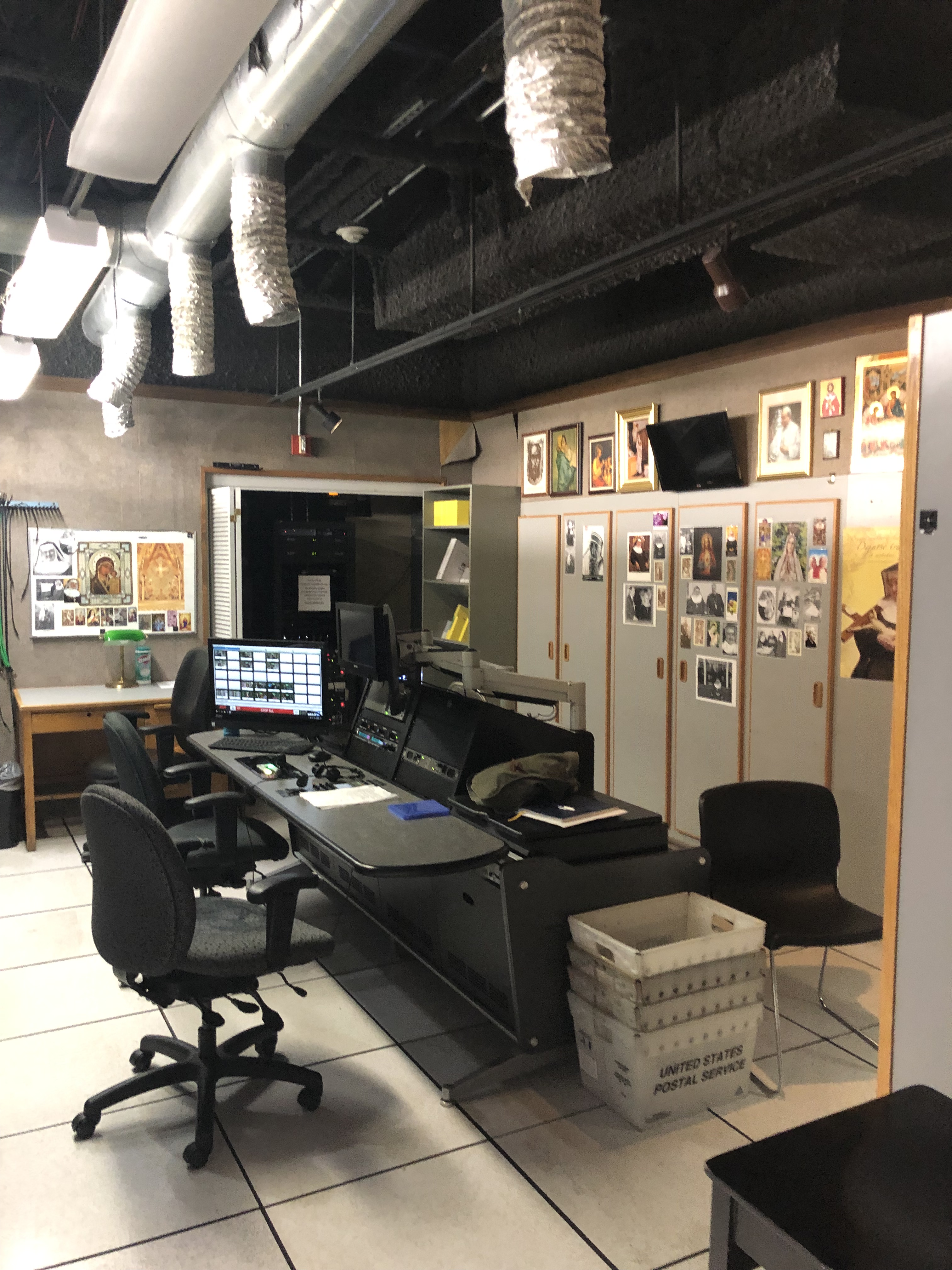 The production room is used for editing and camera control in the studio during live shows.  Cristi related how another miracle occured there.  An EWTN employee named Kathleen was working the graveyard shift.  She went to use the taping machine that would be soon needed for the daily morning Mass, and found it was not working.

Kathleen tried everything, including going to the chapel where she asked Padre Pio for help.   When she returned to the hall, she saw an old friar come out of the production room and disappeared around the corner.  She then found the taping machine was working.

Fun facts I learned on the tour of the EWTN studios:

There are eight huge satellite dish 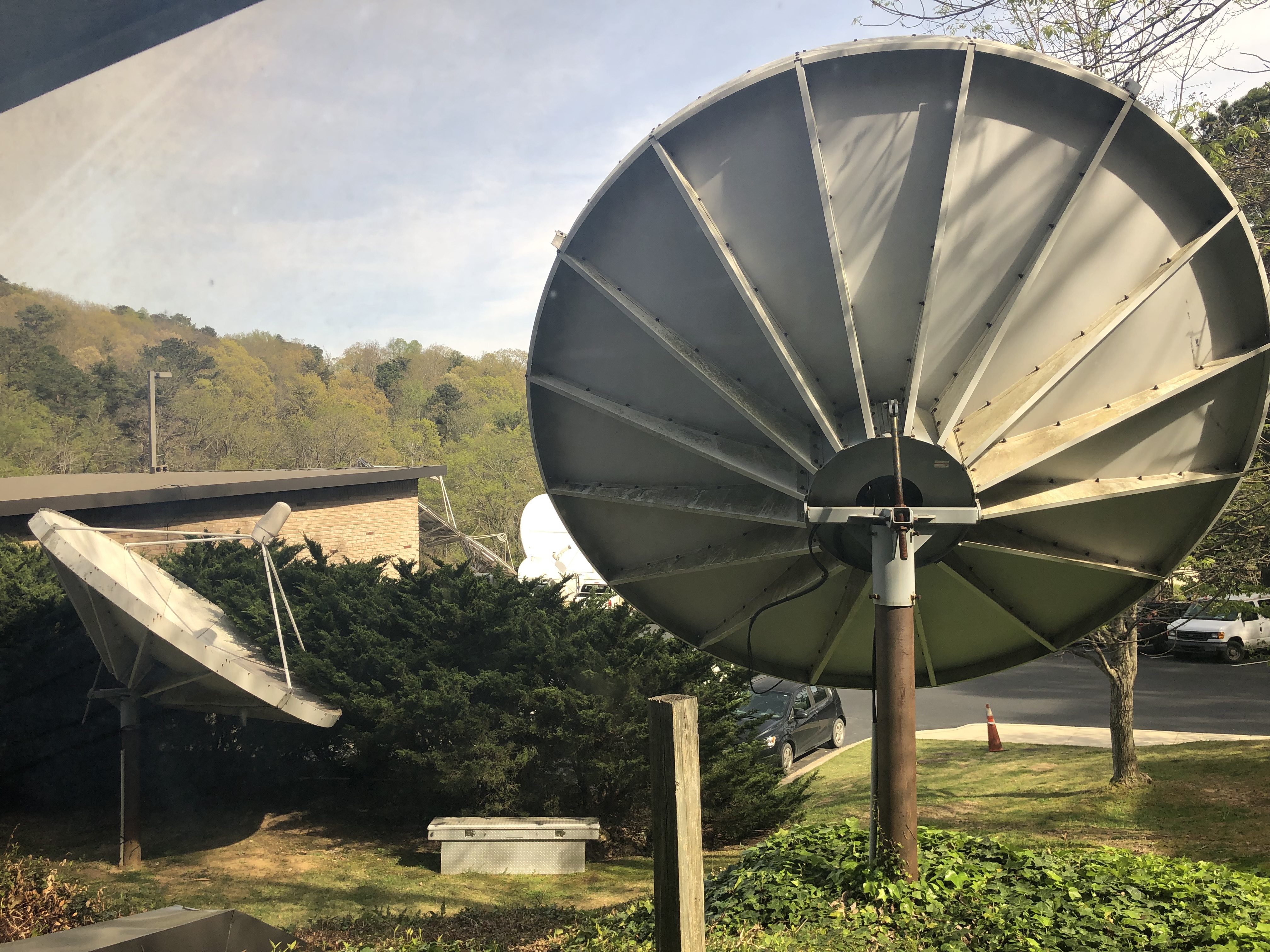 EWTN has about 500 employees worldwide.  Three hundred are in Irondale.

Two EWTN employees man the technical operations center (TOC) 24/7 in 12 hour shifts.  They monitor screens for on-air programming on all the satellites simultaneously to be sure there are no problems.

The monastery’s old three car garage that was the original studio is now the main control room.

Eighty percent of EWTN’s programming is produced by EWTN; the rest is pre-screened for theology and quality control before being accepted for broadcast.

Thirty seven million dollars was donated by a Dutch contributor to start the EWTN radio station.  Originally located in nearby Vandeveer on top of a hill where Mother Angelica had a vision of Saint Michael the Archangel, the old shortwave still is there.  The studio for all radio programs originating from Birmingham is on-site at Irondale.  The first location was in a broom closet!

Attending a filming as part of the studio audience is a great peek behind the screens at production and a way to connect with persons you may have seen on TV.  I attended two filmings of Scripture and Tradition and one of EWTN Live during the days I visited.

The first Scripture and Tradition program I accompanied an organized group of Chaldean pilgrims from Michigan on April 2.  You can read about that here.  The second was a pre-recorded “Mail Bag” show to be used when Father Mitch anticipated being out of town.  That one was just released May 7, and I had the somewhat odd experience of seeing myself ask questions from the audience!

The evening program, EWTN Live, featured an interview with Susan Tassone  (otherwise known as “the Purgatory Lady”) about her recent book on Divine Mercy, Day by Day with Saint Faustina.  After the interview, she kindly allowed photos to be taken of her and audience members.  Here I am…looking as if I were a guest at EWTN! 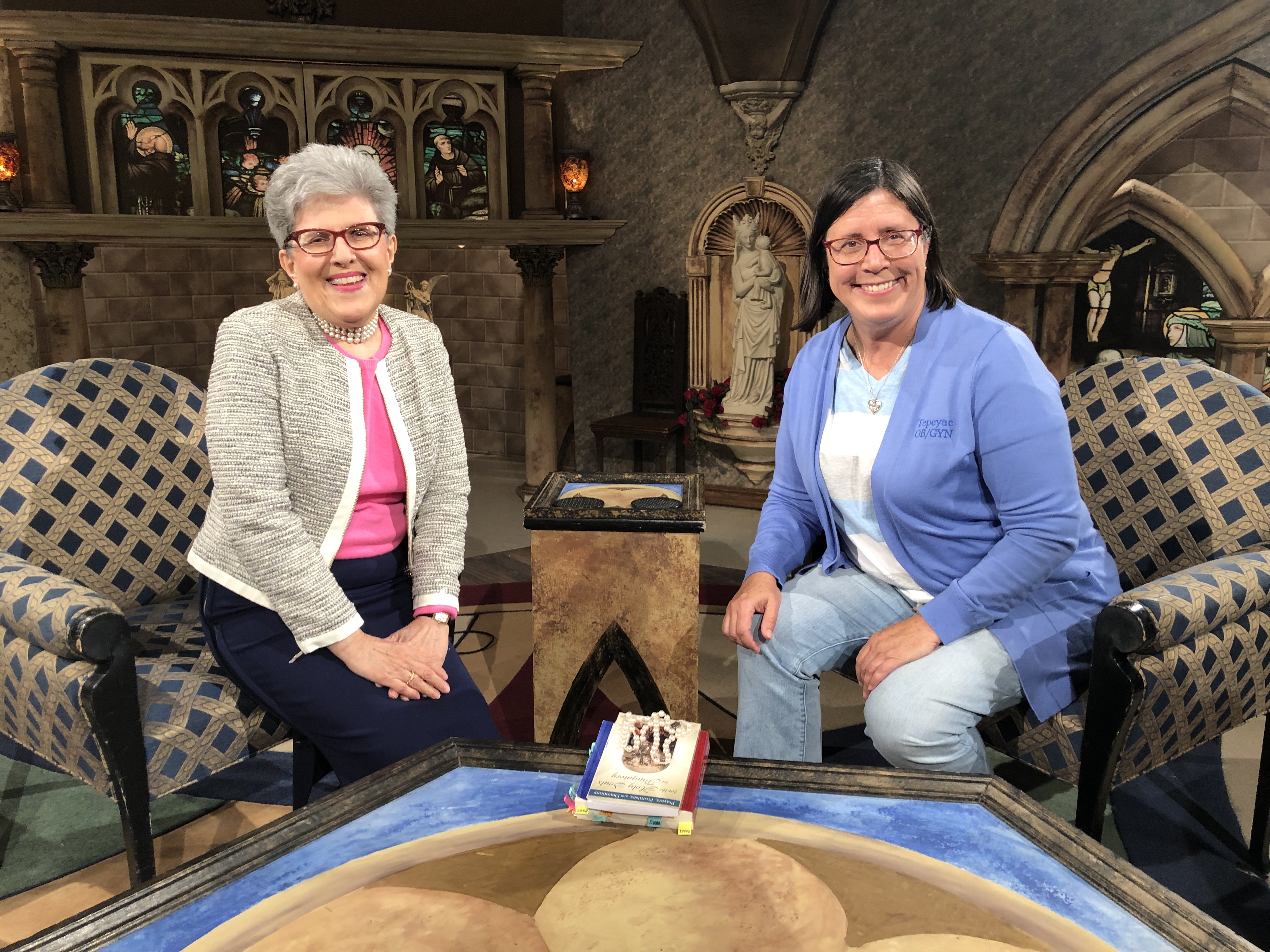 My best takeaway from my pilgrimage to EWTN in Alabama is a deep appreciation for how God works with us in the smallest of details to accomplish His will.  If we are willing, as was Mother Angelica, to respond fully and generously to what he invites us to do, nothing is impossible.  With all her very human qualities and her remarkable perseverance in the face of obstacles, Mother Angelica inspires me — and perhaps you as well.  When we trust God completely, He works great things in our lives, no matter how improbable the tasks He gives us appear.