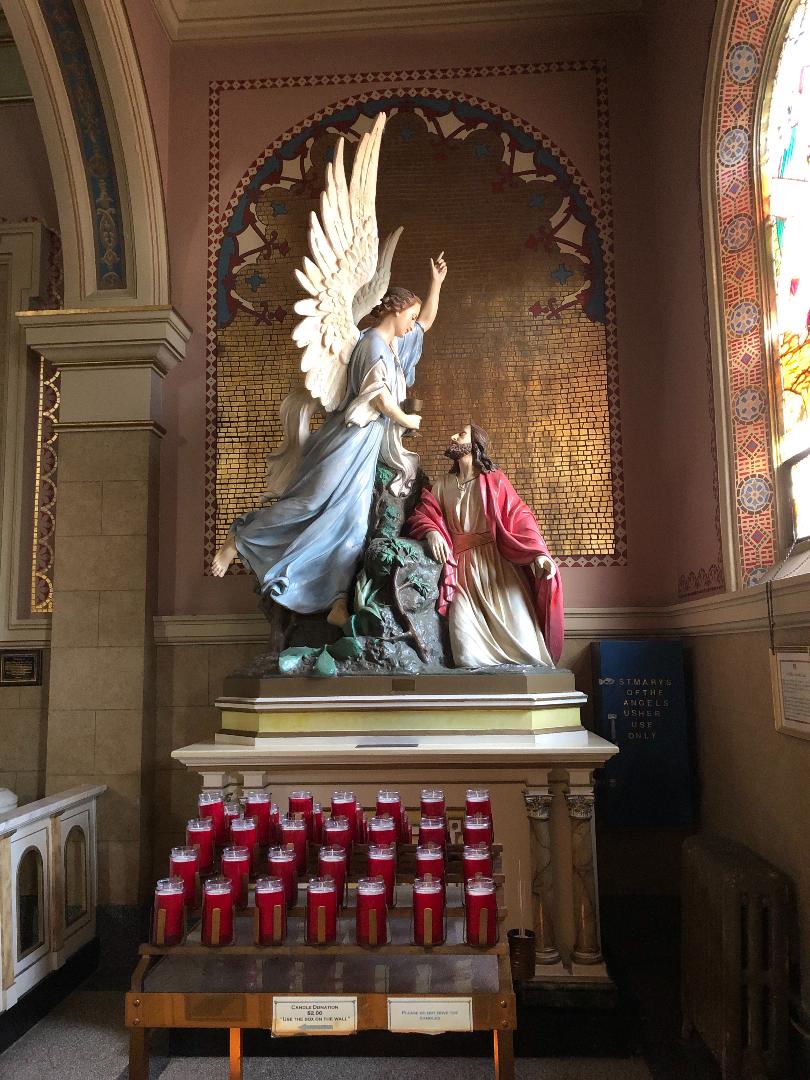 Saint Mary of the Angels in the Bucktown neighborhood of Chicago is one of the most inspiring churches I’ve ever seen. Founded to serve Polish immigrants and built thanks to their hard work and donations, the Roman Renaissance style church was completed in 1920. Modeled after Saint Peter’s Basilica in Rome, the interior contains ornate decorations and paintings. The warmth of the gold and pastel interior contrasts with the more sober red brick and white trim on the exterior, with towering white statues of angels along the roof. 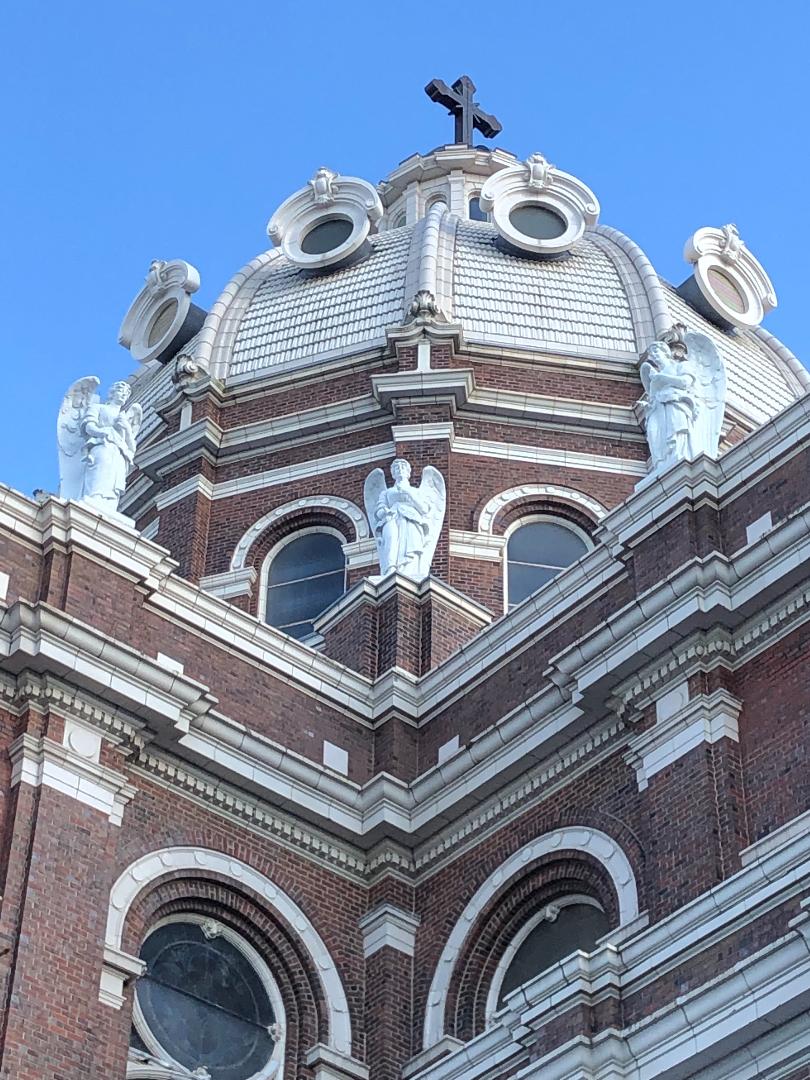 As you can read on the history page of the parish website, this historic gem was nearly lost. The parish shrank over the years due to migration to the suburbs. In 1988 the deteriorating physical conditions of the church led the Archdiocese to close it. Demolition plans were put on hold after vigorous objections by parishioners and historical preservation groups.

In 1991, the Archdiocese entrusted the parish to Opus Dei. Thanks to major fundraising through Opus Dei, the dome, roof and stained glass received extensive repairs. Combined with a restoration of the interior decorations and lighting, these improvements allow us a glimpse into its original splendor. Work is ongoing and you can assist in restoration by donating.  Both spiritually and aesthetically. Saint Mary of the Angels reminds us of how central the Church was in the lives of immigrants and invites us to make the Church central in our lives today. 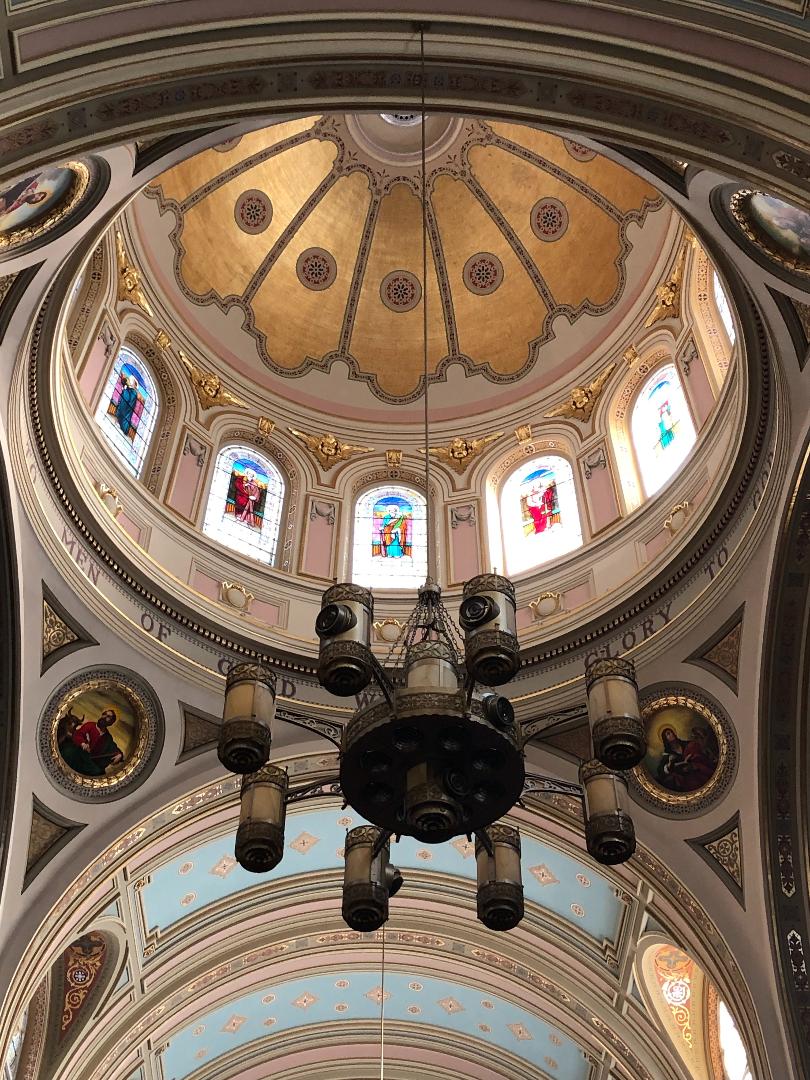 With a thriving school and many parish educational, social, and charitable activities, Saint Mary of the Angels has experienced a revival, drawing parishioners locally and from a distance. There is a small chapel dedicated to Saint Josemaria Escriva in the lower level. It contains a lovely altar, as well as relics of this Saint and founder of Opus Dei. Angels are particularly relevant to the prelature of Opus Dei, as the vision of this “Work of God” focused on holiness in ordinary life was placed into Saint Josemaria’s mind and heart on the Feast of the Guardian Angels. This date is still celebrated as the anniversary of Opus Dei’s founding.

The abundance of angels inspired me to reflect on how we are surrounded by these unseen holy beings. I made a small slide show of angel images on the Church exterior and another of angel images inside that you can view on Tin Can Pilgrim’s Facebook page. 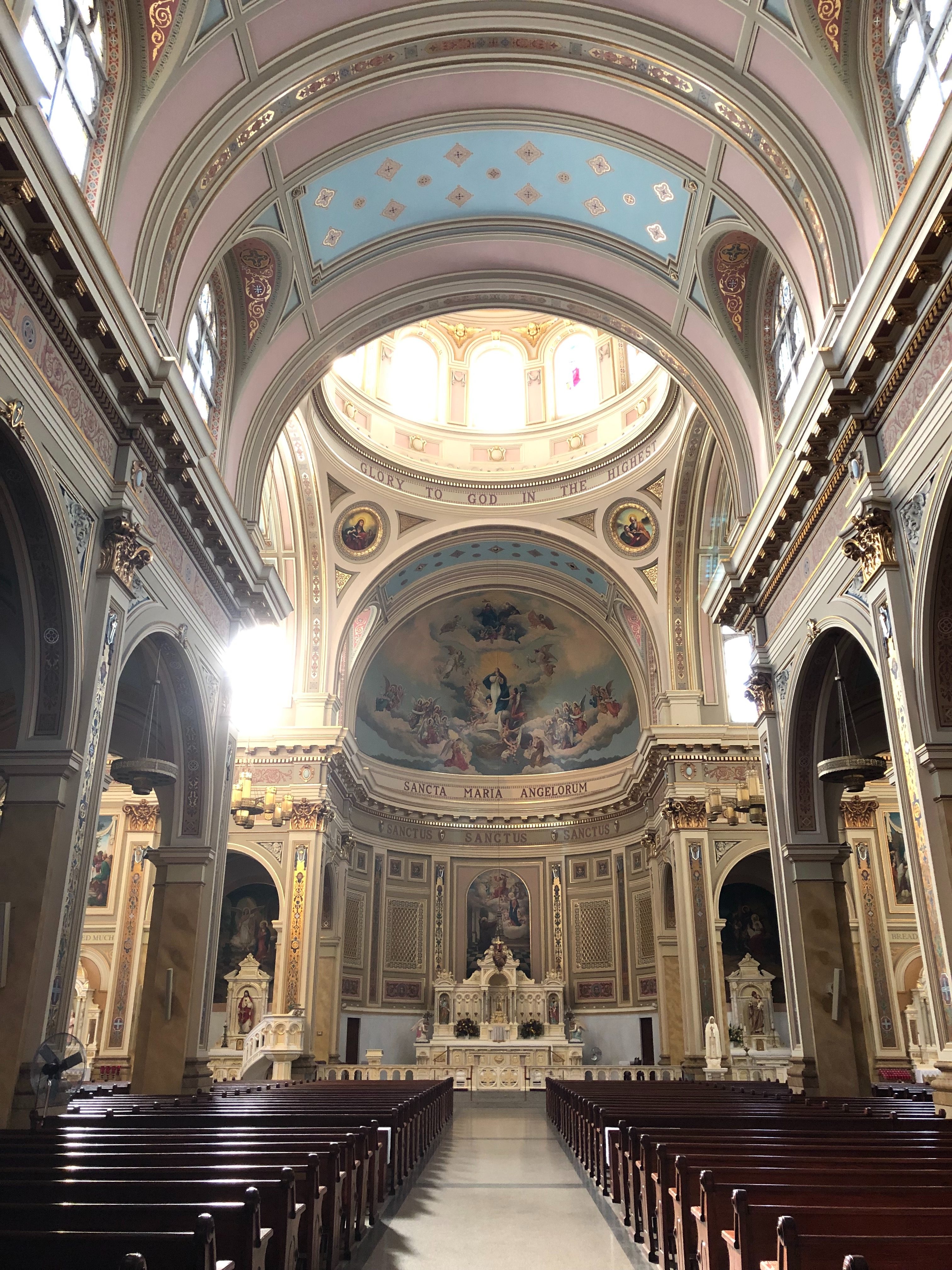 Years ago, I viewed angels as something like fairies. I thought of them as extremely cute for children to believe in, or as mythical beings like unicorns whose images teenage girls and little old ladies collect. Sometimes overly sentimental images of angels can encourage that perspective.

Angels are powerful spiritual beings. Each of us is assigned a guardian angel when we are conceived in God’s mind to watch over us and guide us to help bring us to Heaven. This is not the cute little cartoon character we imagined when we were children but a being terrible and majestic in beauty and power. A wise man once said your angel sees the image of God within you as you are created in God’s image. Angels have been seen as pure light by those with near-death experiences but can take whatever form they wish, as the Scriptures reveal. 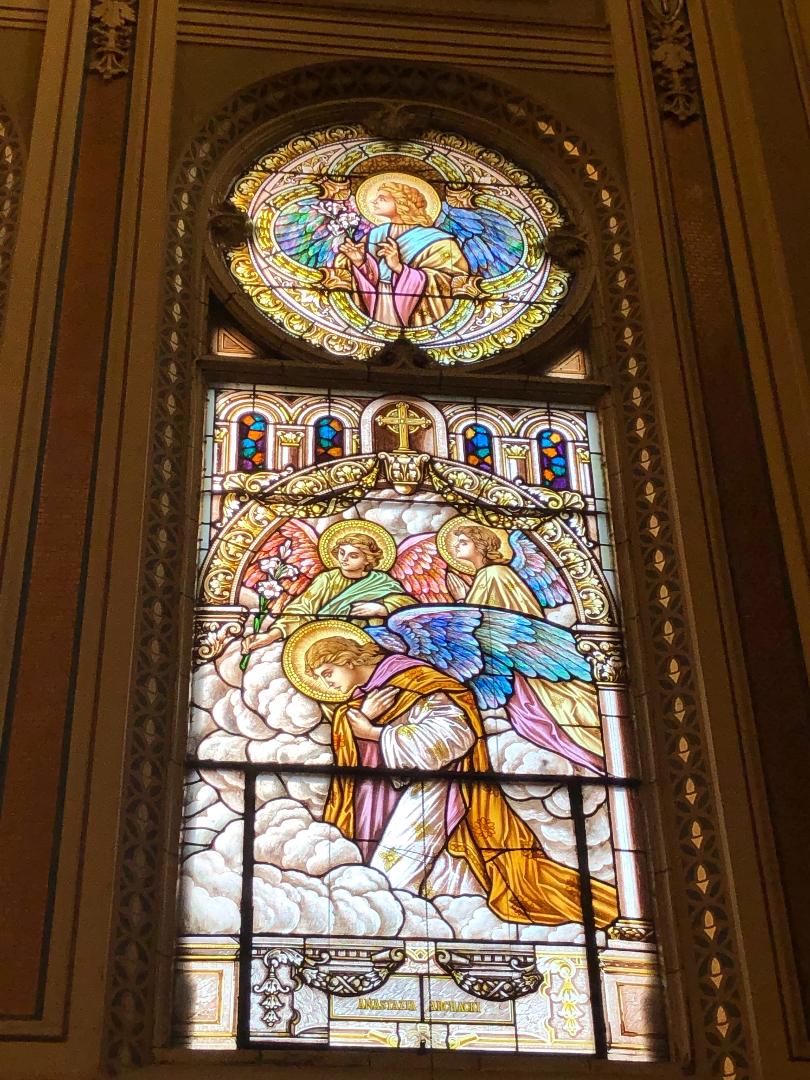 At Saint Mary of the Angels, angels are depicted in many forms. The splendor of the art and architecture, and the reverent devotion with which the sacraments are celebrated, echo Saint Francis of Assisi’s response to Christ’s call to him to “repair my house.” Saint Francis thought he was meant to restore the ruins of the original chapel of Saint Mary of the Angels, where later he discovered his broader vocation. A fascinating explanation of the parallels between that original chapel and its namesake in Chicago can be found here. 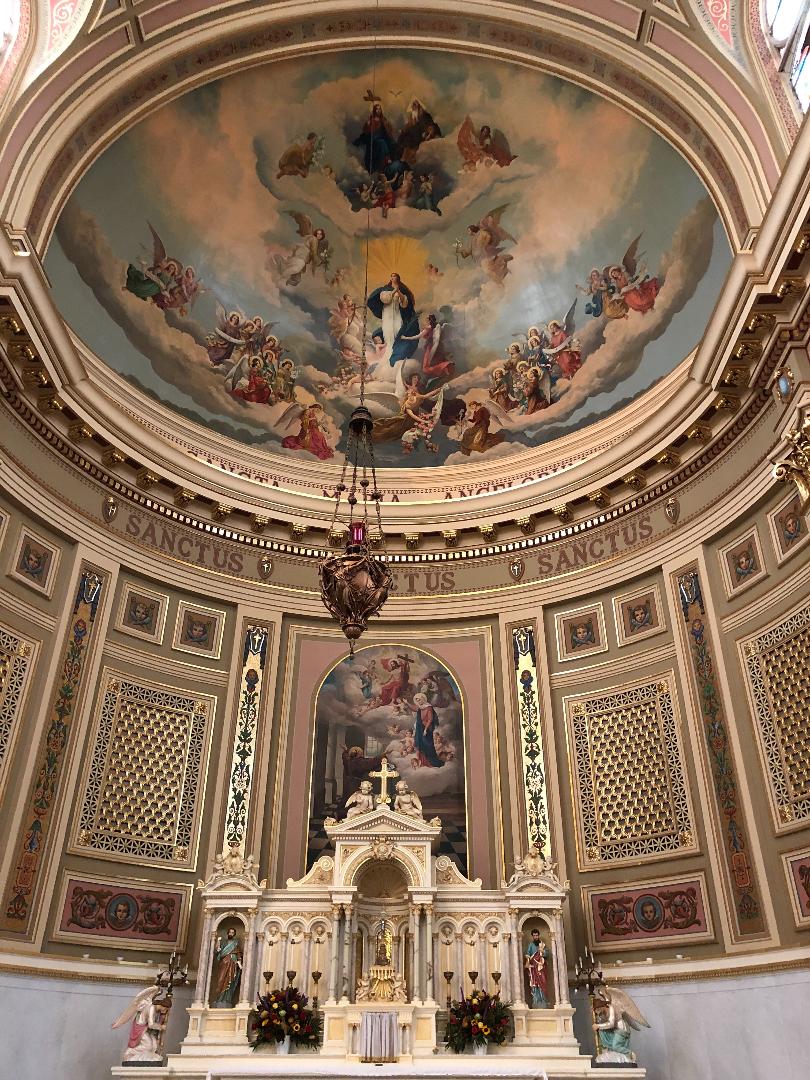 A visit to Saint Mary of the Angels may open your eyes to the presence of angels. While there are many ranks of angels serving God, it is amazing and delightful that we each have our own angel chosen for us by God. You may want to name your guardian angel and to pray with your angel (used generically, as angels are neither male nor female). I imagine mine as about ten feet tall covered in luminous white feathers with eyes that see everything, never sleeping and never abandoning me. When I feel sad or lonely, I feel comforted knowing my angel is with me. I think of vast pinions stretched over me, protecting me. Hopefully, the power and beauty of angels depicted in the art and architecture of Saint Mary of the Angels will lead you to better know your guardian angel and to seek the support and intercession of these powerful beings.

Saint Mary of the Angels is located at 1850 N. Hermitage Avenue, Chicago, IL 60622.  The telephone number is (773) 278-2644 and the website is sma-church.org.  There is ample parking and a few blocks away are some pubs and restaurants.  Try the delicious Mabel’s Table for a tasty meal and inventive menu. 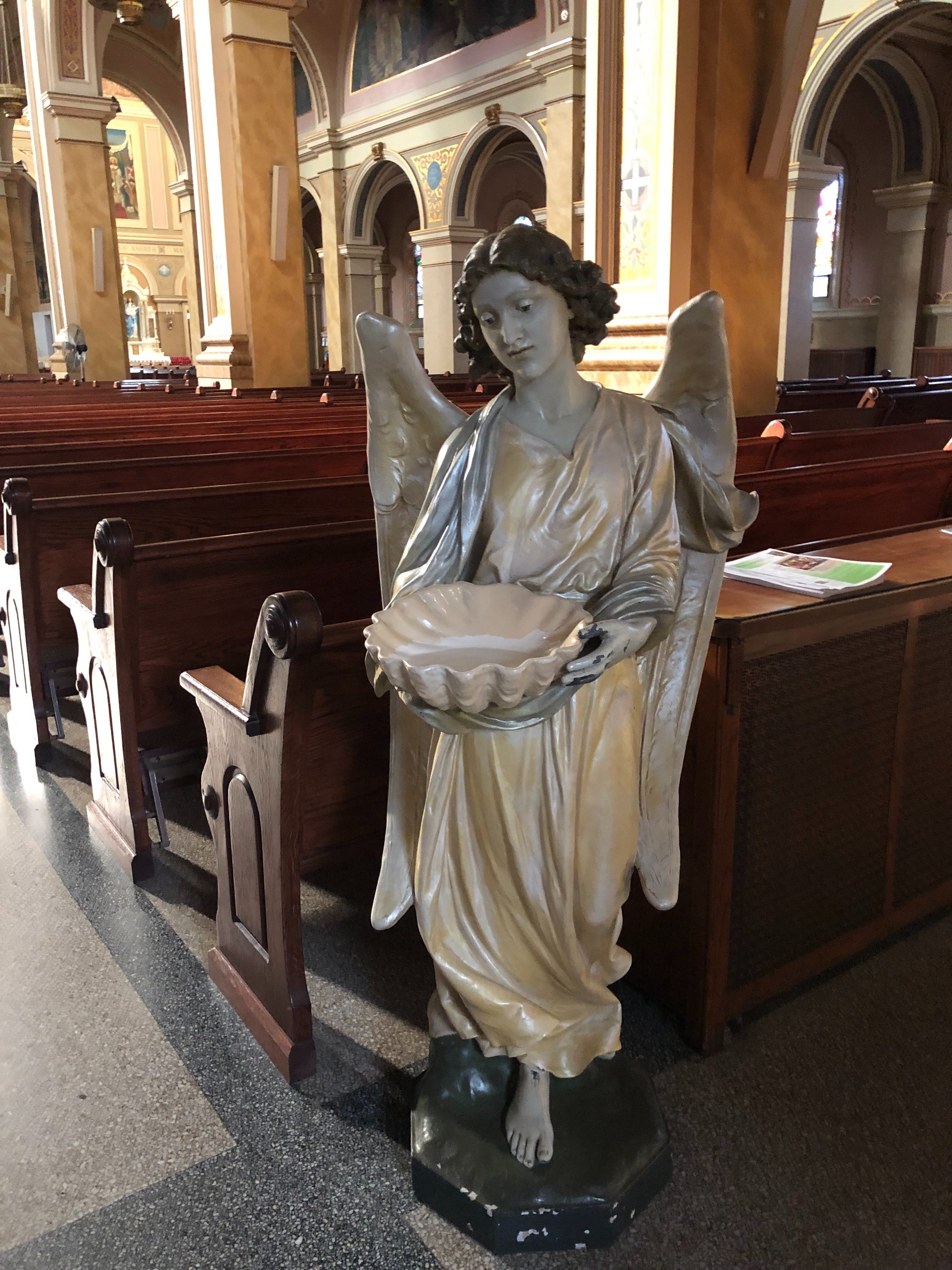