Following Christ at the Balloon Fiesta 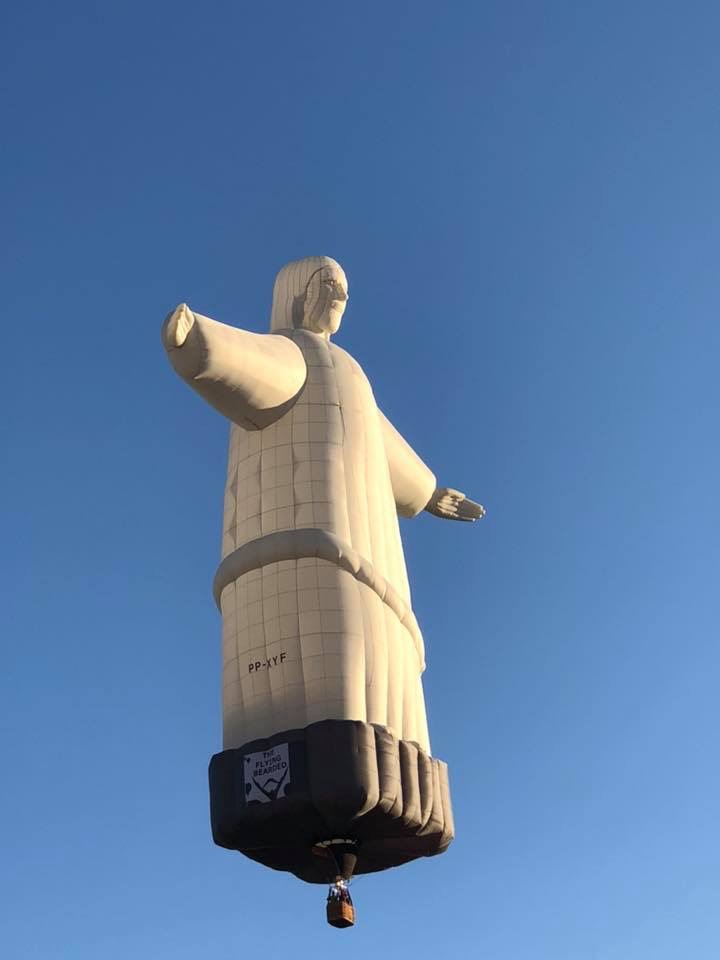 Beauty and daring are on display each October at the Albuquerque International Balloon Fiesta.  Christ the Redeemer, Star Wars characters, penguins, a blue dog, and a saxophone were among the panoply of character ballo0ns, plus scores of racing balloons, commercial balloons, and balloons promoting causes.  Nearly 600 of these towering yet fragile structures took to the air over the course of two weeks. 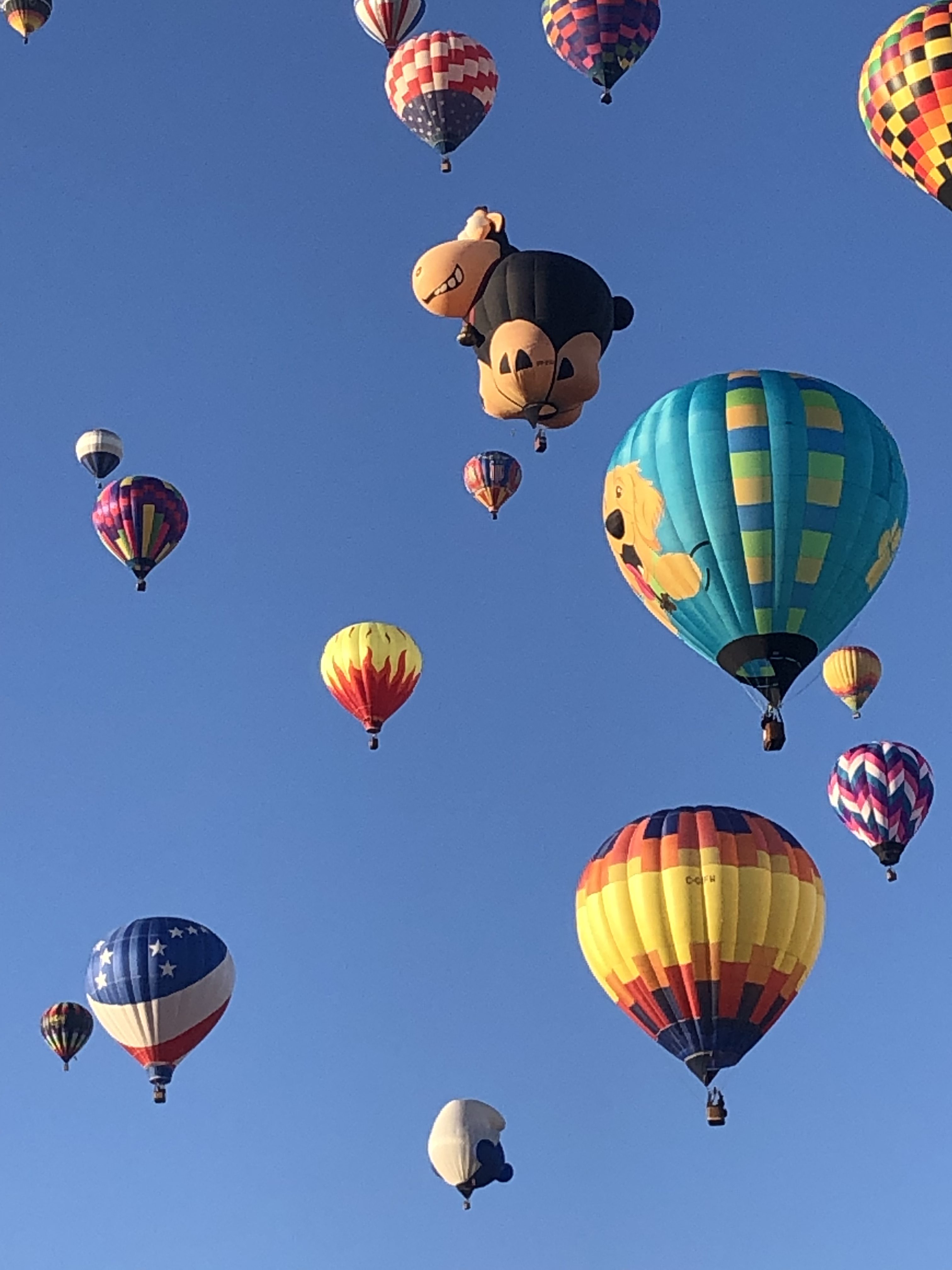 I was fortunate to secure a spot for my Airstream on the edge of the balloon field for four days.  This unique “dry” camping experience (that is, no utilities) gave me an in-depth and sometimes very close-up look at the balloons and fireworks.

My primary reason for visiting New Mexico was to visit St. Joseph’s Staircase at the Loretto Chapel in Santa Fe, but the balloon fiesta would have been worth a trip itself.  The balloons were the main attraction, with “Mass Ascensions” in the weekend mornings, acrobatic stunts, and evening “Glows” during which many balloons inflated on the ground with their propane torches illuminating the colors and patterns of the balloon designs.

In addition to the balloons, there were exhibits, food, entertainment, crafts, and souvenirs, rather like a very large county fair less the livestock.  Firework displays lit up the nights on the weekends, close enough to my Airstream to make beautiful reflections in the aluminum.

I also met up with some friends at the Airstream Rally in one area of the RV parking lots and enjoyed a Texas style pig roast and potluck dinner. 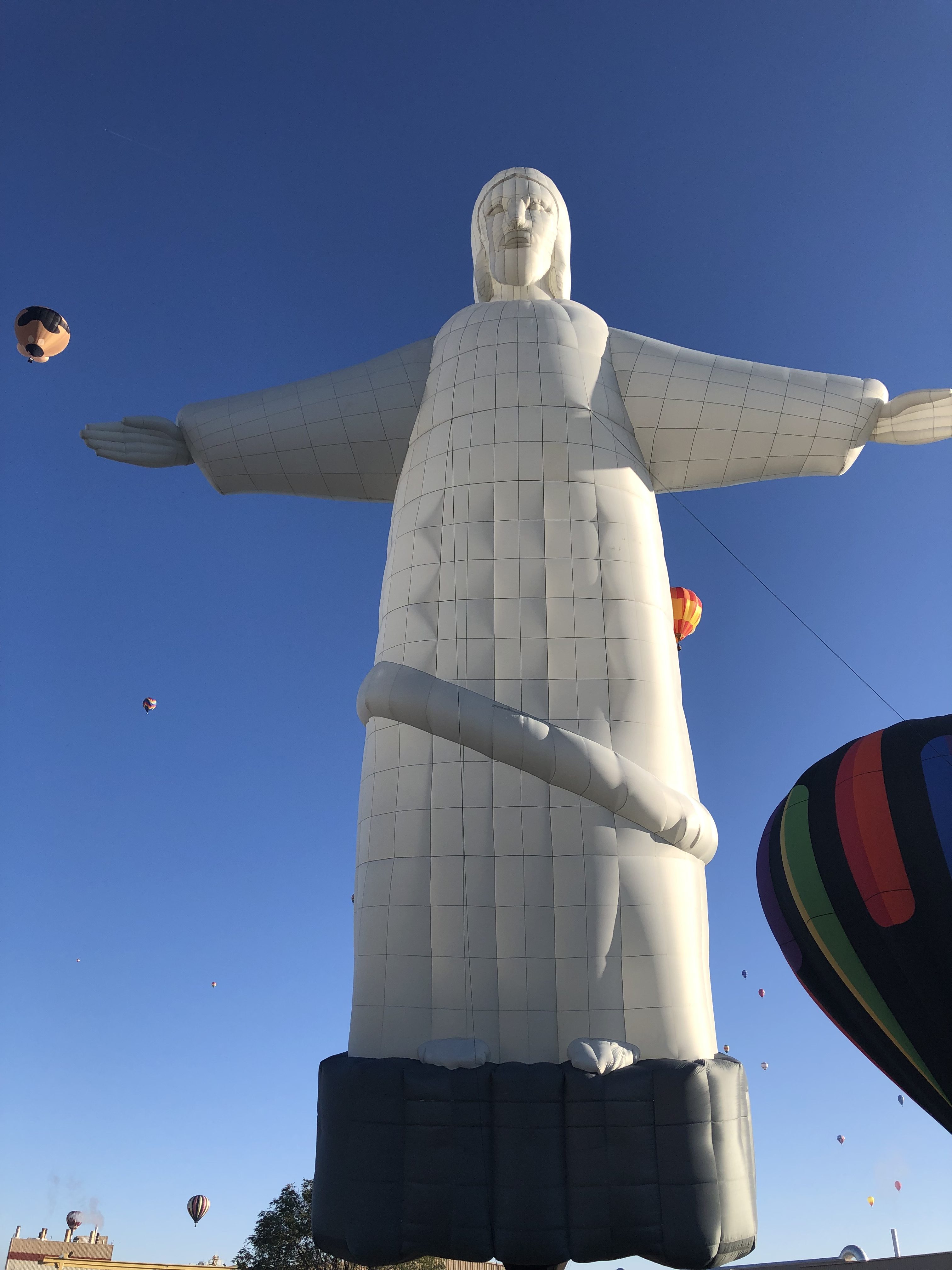 My favorite balloon was Christ the Redeemer, fashioned after the statue of the same name in Rio de Janeiro, Brazil.  This very tall balloon is owned and piloted by Brazilians.  I tracked down the group on the launch field to see if I could volunteer to join the chase crew (the people who follow the balloon to its landing spot and help re-pack the balloon).  I had the idea that I could follow Christ into the desert literally instead of figuratively; in fact, the balloon landed in a lumberyard in the suburbs — a fitting location for Jesus as a skilled carpenter!

Before the flight, I spoke with Kiko, the pilot, and Tom, another pilot who was assisting.  They explained that the balloon did not have religious significance as such, but was created to celebrate Brazilian nationalism.   The famous statute of Cristo Redentor is a symbol of Brazilian national identity.  Yet, for most of the people who come into contact with the balloon, including many Brazilians, it has a deep religious connection.   The Cristo Redentor balloon has traveled all over the world, including France, the Philippines, Taiwan, and Germany.   The next planned stop on this trip was Mexico.

For me, the religious meaning was what made that particular balloon so engaging for me.  Just seeing it rise up among the other balloons on the field was a reminder 0f Christ’s presence even in all the activity.  The launch brought to mind the mystery of the Ascension as the balloon went higher and higher and drifted out of sight.  Searching for the balloon’s landing site made me think of the Fifth Joyful Mystery of the Rosary, and seeing the balloon deflate and appear to be kneeling brought to mind the Agony in the Garden.  I don’t mean to be disrespectful; this floating icon with arms outstretched for me was supernatural and brought a more spiritual dimension to the Balloon Fiesta experience.  It is a grace to see reminders of the unseen reality in the ordinary (or  in this case rather extraordinary!) things of the world.

At 75 meters, the nylon balloon is three meters taller than the statue of Christ the Redeemer in Rio.  Each flight burns thirty to forty gallons of propane to heat the air  inside the balloon.  The balloon weighs 1100 lbs.  The owners, Elio and Washington, had it made by Aero Magic in Brazil.  Because it is a heavy balloon and a special shape, it is difficult to fly.  The small basket can hold only the pilot and two others.

The balloon is spread out on a very large tarp to be inflated.  The basket containing the propane heater (and later the pilot and passangers) starts out tipped on its side to better inflate the balloon with superheated air.  The launch crew closes vents in the nylon balloon and holds onto long lines to secure and steer the balloon as it is being inflated.

Once the balloon is nearly vertical, the basket is righted and the crew climbs in.  Keep in mind that at the Balloon Fiesta this all takes place with mulitple balloons in very close proximity with a synchronization designed to prevent balloons from running into one another.  After the launch, the chase crew folds up the tarp and hops into the chase truck to meet the balloon wherever it lands.

Debbie, the local chase crew driver for Christ the Redeemer, had been crewing at the Balloon Fiesta for many years.  She met her son’s father there and was driving for chase crews when nine months pregnant.  Her son Scott grew up around the balloons and is now a balloon pilot.  I interviewed him, and Debbie later sent me a photo of him at the balloon fiesta when he was about four years old.  Ballooning is a family event!

I left the Balloon Fiesta with wonderful memories and photos.  The final morning I was there I used the small skill set I acquired by assisting some of the balloon crews whose balloons landed right behind my tiny home.

One group, the “Heaven Bound Balloon Team” wore T-shirts with messages about Jesus.  Their ministry uses the balloon to reach out to people, preaching that God’s Kingdom is at hand, right now.  Their message is that God can be your pilot, using your growth in faith like a burner to keep you flying with breathtaking beauty,”just like a hot air balloon.”

In a fitting conclusion to my visit to the Balloon Fiesta, we prayed together in the parking lot and asked the Lord for safe travels for all.