Art at its best raises your mind and spirit to a different level by stirring your perceptions, perhaps so subtly that you have difficulty putting a name to what you feel.  Great art helps you to see more deeply; it echoes the divine in its creativity.

My visit to the Cathedral of the Immaculate Conception in Tyler, Texas led me to a contemporary example of such art.   A painting of Jesus and Mary to the right of the sanctuary fascinated me.  It depicts Our Lord placing a golden mantel around Mary’s shoulders and seems to glow in the cool darkness of the Cathedral.  I was intrigued to learn more about the artist and view other examples of his work.  The Cathedral office staff helpfully directed me to a nearby college chapel and the Chancery (the headquarters of the Diocese of Tyler).

In medieval times, when very few people could read, religious art taught theology through images and color.  Robert Puschautz, the young artist in residence for the Diocese of Tyler is rediscovering this technique, adding his own prayer to his work.   He studied at a classical painting school in Chicago and at the University of Illinois in Urbana-Champaign.   After teaching art for a few years and experiencing growth in his Catholic faith, he ventured into Catholic contemporary art.  He was drawn to combine Catholic formation with his paintings, using a classical style.  Much of his interpretation comes from icons.  He seeks an austerity of figures, a clarity of vision.

Mr. Puschautz works to create and install paintings in churches in different locations around the Diocese of  Tyler as a form of catechesis.  Indeed, his painting of Saint Philip and the Ethiopian illustrates the mission of the Diocese’s St. Philip Institute of Catechesis and Evangelization.  The original painting may be found in the Chancery offices of the St. Philip Institute.

Founded by Bishop Joseph Strickland to implement the teaching mission of the diocese, the St. Philip Institute creates and disseminates materials to teach Catholicism.  The Institute plans to expand into the global Catholic community and be a model for other teaching dioceses.  As the Stabat Mater Art Fellow of the St. Philip Institute, Mr. Puschautz’s work advances that mission in an impactful way.  Prints and master copies of his paintings may be purchased on the Institute’s website.  Also, the website’s images of his paintings are far better than my own photos here and are accompanied with detailed explanations of their meaning.  You’ll also find other helpful resources at the St. Philip Institute if you wish to delve more deeply into the faith that inspires Mr. Puschautz. 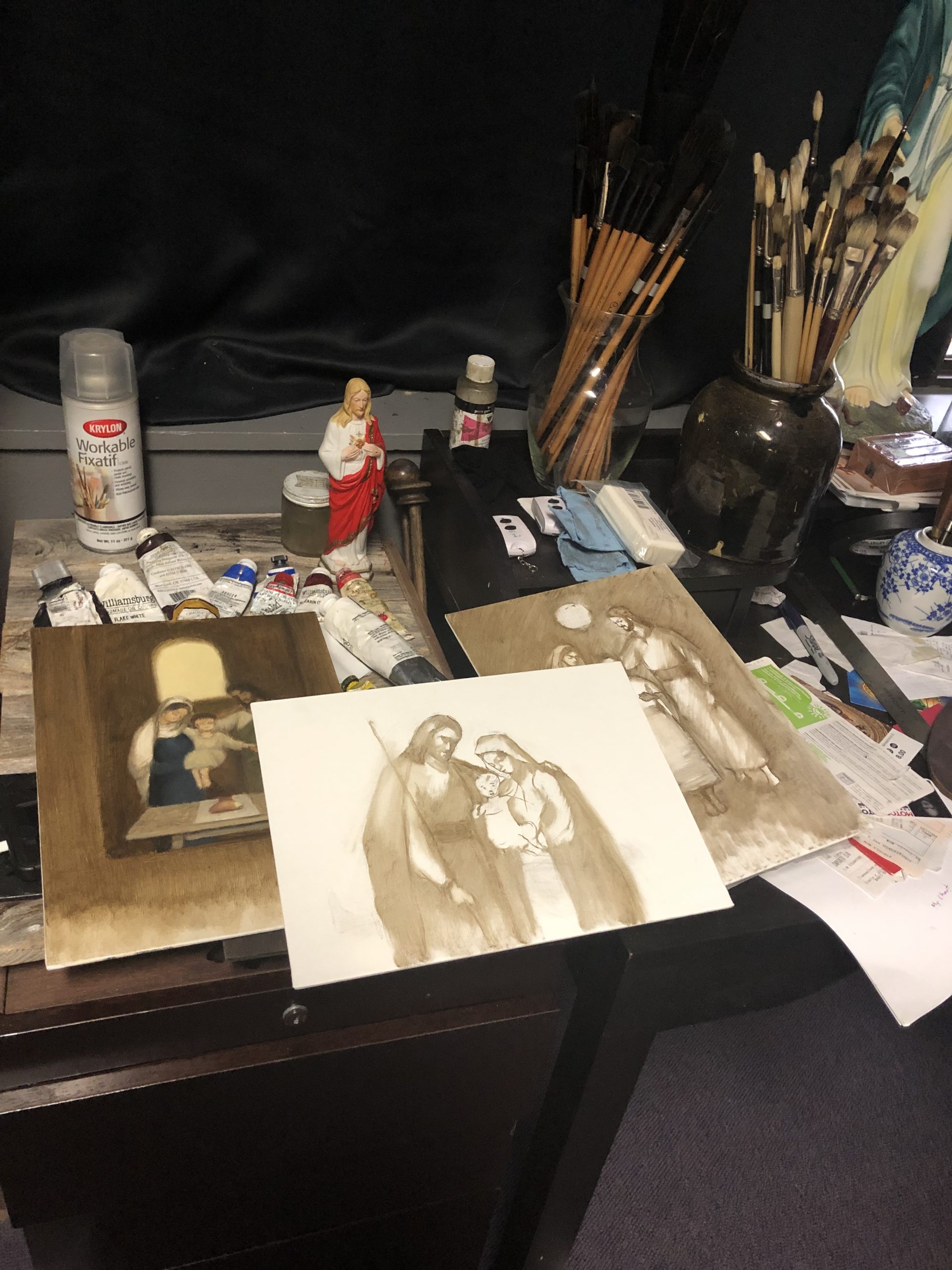 The artist gave me a tour of his modest studio at the Chancery.  He described how art as a form of catechesis uses symbolism to visually clarify Church doctrines such as the Immaculate Conception.  Visually, his painting of the Immaculate Conception transitions from dark to light with Jesus placing the golden mantel on Mary.  This mantel is a symbol of grace merited by Jesus’ sacrifice on the Cross, outside of time, referenced by the bloodstains on Christ’s hands.   All grace comes through Christ, explains Mr. Puschautz.  The depiction of  Mary as a young teenage girl standing on the globe is typical imagery of the Immaculate Conception, he added, dating back to 14th and 15th century works of art.  The globe is the world, the serpent is the Devil, and Mary is crushing the serpent’s head.  The world is embroiled in the flames of battle between Heaven and Hell, but Mary stands on top of it, untouched.

Combining contemporary techniques with classical, Mr. Puschautz uses both hand drawn sketches and an iPad.  He works with models and fabric to help him capture the realistic figures that inhabit his canvases.  Generally, he works out his compositions on paper with charcoal but sometimes directly on canvas. He then does color studies of heads, hands, and other details before transferring the composition to the large canvases which he will paint.  To me, it shows in his work that he prays as he creates it.  If you have the chance to see the original paintings in Texas, you may be blessed with a visceral impact leading to contemplation.

Two of these paintings are in a small chapel dedicated to Saint John Paul II near the University of Texas Tyler campus.  To the left of the altar is Madonna of the Roses, a painting of the Blessed Mother with the infant Jesus in a garden.  To the right hangs a depiction of the  Pieta — Mary holding the adult Jesus’s tortured body following the crucifixion.  This Pieta is a master copy of a painting created in 1875 by French artist William Bouguereau.  Mr. Puschautz changed the background to focus on Mary and Jesus.  He also added  liturgical cloths in the background because the painting was intended as an altarpiece accompanying Madonna of the Roses.

I’m grateful to a priest I met in San Antonio who suggested I look for this artist’s work hanging in the Cathedral in Tyler and in the chapel at the University of Texas.  Some of my best pilgrimage destinations have been to sites suggested by people I meet during my journeys.  I hope that you too will find similar delight in visiting the places I’ve discovered in this way.   Please share any suggestions you have for places you’d like me to visit and write about in the link on my home page.