A Visit to Rome GA During the Pandemic

Thanks to a Benedictine monk and architect from Belmont Abbey in North Carolina, this  Gothic and monastic style church brings to life many elements of the past.

Most prominently, the high altar demands attention.  It is stunning.  Fanciful white spun sugar towers surround a sculpture of the Virgin Mary.  She tenderly holds baby Jesus who clings to her, echoing the flowing lines of her blue robe.  Mary’s golden crown picks up accents in the marble and the edges of her robe.  The gold decoration repeats again in the mosaic alcove around the statue.

Below the statue stands a crucifix with small white columns to either side.  Below the crucifix shelters a gold tabernacle.  On each corner of the altar, a white marble angel holds a pedestal for candles or other decorations.

The lower half of the high altar contains a detailed bas-relief sculpture of the Last Supper.  Angels with bowed heads and folded hands flank each side of the sculpture.  Their unfurled wings seem to lift and support the horizontal surface on which Mass may be celebrated.

Fashioned of Carrera marble with Venetian gold mosaic and black onyx accents, the high altar was built in Italy in 1930 for a chapel in the Midwest.  After that chapel closed, St. Mary’s purchased and installed the altar as part of a series of renovations in the 1990s.

As part of the renovations, an altar rail – originally used for people participating in the Mass to kneel at and receive Holy Communion – was obtained from the same Midwest chapel.  Both the pulpit and the low or table altar reveal their origin as part of this original altar rail.

Traditionally, the priest during Mass faces the tabernacle at a high altar against the eastern wall of the Church.  Since the late 1960s, the priest typically faces the congregation using a free-standing low altar, although at times the priest may face “ad orientem” or “to the east” even when using a table altar.  Thanks to the creative re-use of the altar rail, the low altar coordinates perfectly with the high altar.

Next, beautiful stained glass windows catch the visitor’s attention.  Giannini and Hilgart of Chicago, a famous art and ecclesial craft glass workshop used by Frank Lloyd Wright, created most of the windows in the church.  Each window depicts a saint or a devotional image, rather than a scene telling a story with several images, due to the limited space.

St. Mary’s simple interior with exposed roof trusses and stucco walls contrasts with the intricate marble altars.  Very lovely carved square stations of the cross made of gilded and painted wood are spaced along the side walls.

The stations are worth a close look, for prayer as well as to admire the craftsmanship.  Station 8, “The Women of Jerusalem Mourn for Our Lord” depicts the emotional encounter between the women and Jesus as he blesses them.  “The Face of Jesus is Wiped by Veronica” somehow captures this brave woman’s pity and awe in the small wooden carving. 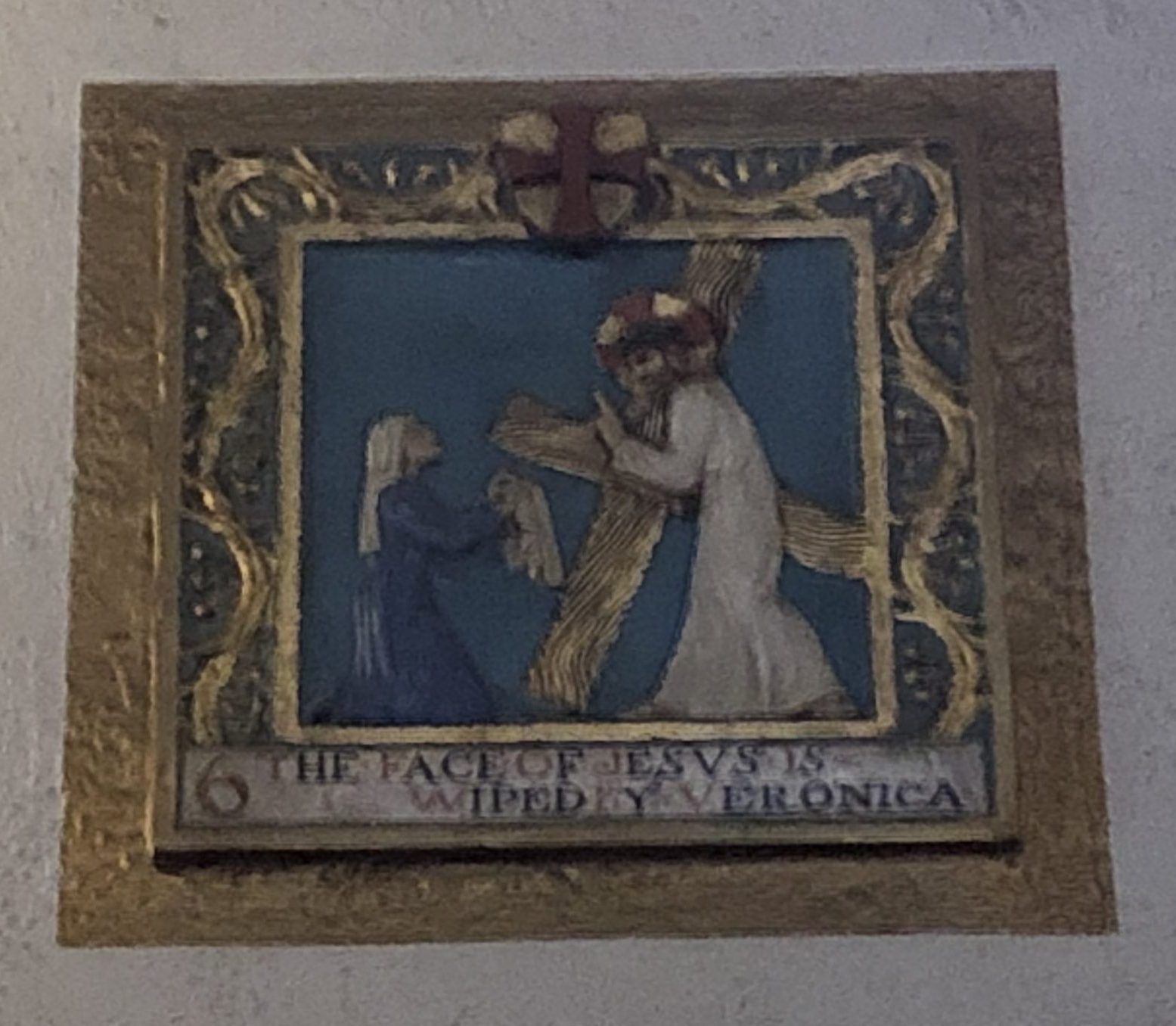 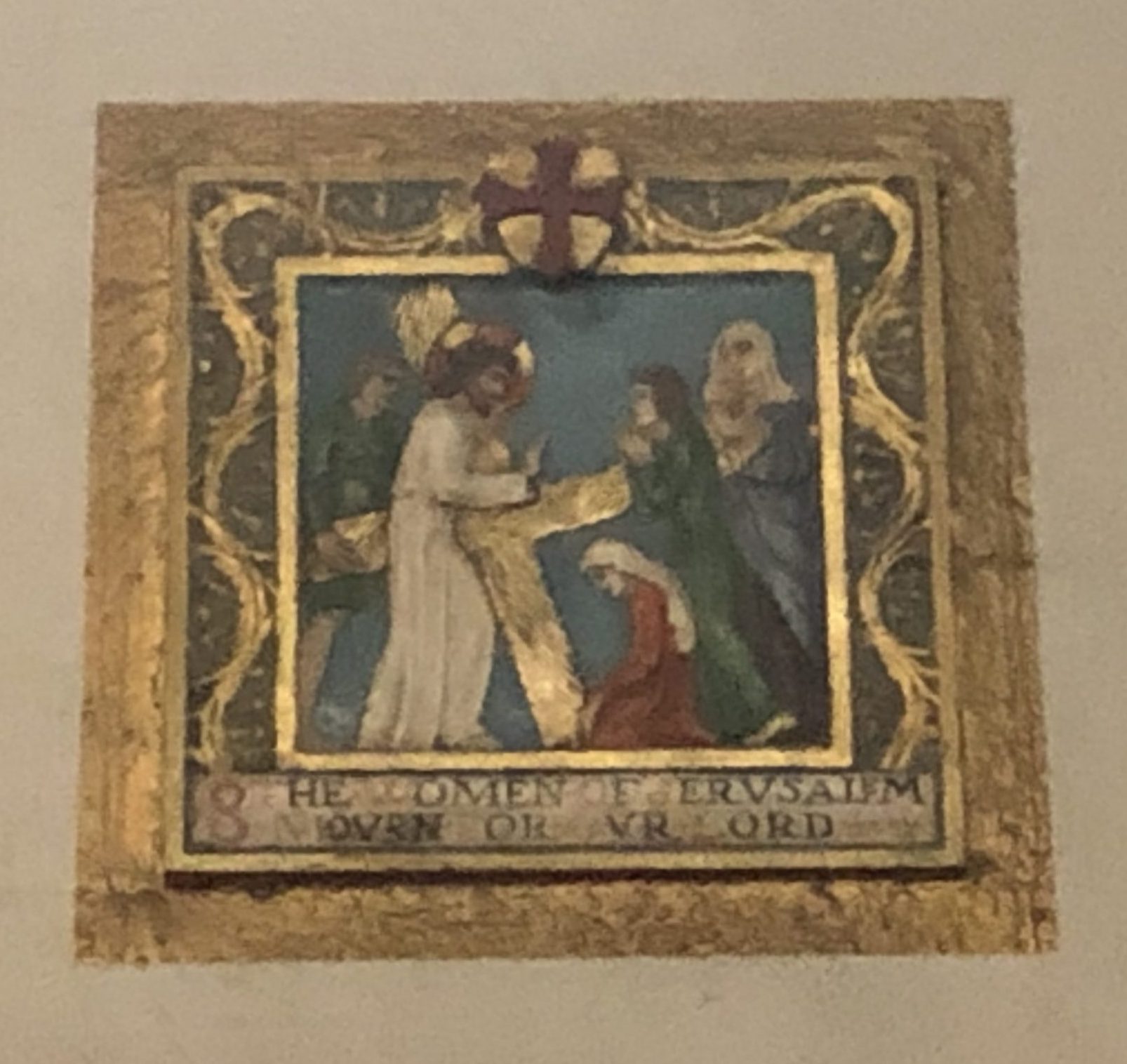 Outside, the renovations bring to life part of the original 1930 design by adding a steeple conceived then but not able to be built due to funding problems.  This tall steeple stands out in the downtown area of Rome and makes the church easy to find.

Rome, Georgia is just within the Eastern Standard Time zone.  When I arrived from central Alabama, I thought I’d be in plenty of time for Mass, but I didn’t account for the time shift!  Still, the two hour drive was worth it to see this lovely church.  If you are passing through Georgia or visiting tourist attractions in the area, I invite you to explore this active parish in person.

St. Mary’s Catholic Church is on 911 Broad Street, Rome GA 30161.  You can contact the staff through the website at www.smcrome.org or phone 706-290-9000.  For another pilgrimage site not too far away, see my post about the monastery in Conyers, Georgia.