A leak in my Airstream pushes me to Ohio 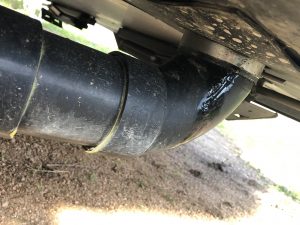 As I enjoyed my campsite in Montana last week, I noticed a drip under my Airstream.  A leak in a travel trailer is bad news!  Water was slowly collecting on the ground under the pipe leading from my black tank to my dump valves.  Quickly, I grabbed gloves and a paper towel to see what was leaking.

Thankfully, it was not black water. A trickle of fresh water was running along the outside of the black pipe where it exited the belly pan. As water will, it traveled to the lowest point and dripped onto the ground.  A leak in my Airstream required immediate action. 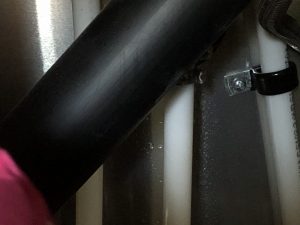 Thus began the search for the source.

I explored all the areas of my 19 foot Airstream, inside and out, where there were pipes or water connections. It wasn’t wet under the front dinette seat where the fresh water tank and water pump live. Nor did I see any water on the floor anywhere or see anything wet under the kitchen sink. There was no water around the shower or the toilet. 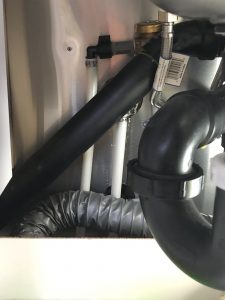 However, behind and under the lavatory sink, I discovered a scant trickle of water slowly running down the interior wall of the Airstream. Drops were forming along the screws that held the connection for the thin white pipe emerging from the top hole between the inner and outer shell of the Airstream. The water ran down the wall, along the pipe, and followed the pipe back into the bottom hole between the shells.  From there, the sneaky water somehow found an exit point along the exterior of the black pipe from the toilet. I dried the moisture under the sink, and left a microfiber towel wrapped along the pipe to catch any new trickles.

It had been raining, so I thought it might be a leak on the roof. I looked and didn’t see any obviously deteriorated caulk. So, I unhooked my outside water hose from the Airstream.

Rejoicing that I could just fill up my fresh water tank and use the interior water pump, I relaxed with a shower.  Unfortunately, the leak in my Airstream started again, soaking my trusty microfiber towel under the sink.  After I dried the area and replaced the towel, I turned off the water pump. I filled up some pots and bowls with filtered water from my site’s outside faucet. Then began a few days of experimentation. 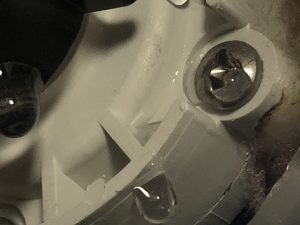 I used the sinks but not the faucets.  For washing up or cleaning dishes, I heated water from outside on my stove then rinsed with cold water in bowls.  I  let the used water run down the drains. The leak did not return.  I decided to turn the water pump back on, but not use the faucets.

Thankfully, no new trickles appeared when I turned on the pump. Encouraged, I flushed my toilet several times and was delighted to see the leak did not return.  However, as soon as I tried the lavatory faucet, drops of water appeared. The same thing happened when I tried the sink faucet. The connections I could reach seemed tight. It was time to call for help.

Due to COVID shutdowns, I couldn’t find a dealer anywhere within a several hour drive taking service appointments. I called Airstream’s factory and explained I had a leak in my Airstream and what I did to try to deal with it.  Fortunately, they were able to fit me in fairly soon to take care of this under warranty.  So now Alvie the Airstream and I are back on the road to Jackson Center, Ohio.

Meanwhile, I am bathing, washing, and cleaning like a true pioneer woman (or, at least, a Girl Scout…).  I lug my water from outside in pots and pans and heat it on the stove. This works for washing me and washing dishes, but I’m eager to get this leak fixed.  If I weren’t social distancing, I’m sure my neighbors would be eager for me to get a real shower too.

Plans often change on the road and in life.  A leak in my Airstream is not what I expected.  Responding with cheerfulness and asking for the grace to do God’s will in all things makes unanticipated events easier to accept.

After all, perhaps there is someone in Ohio I’m supposed to encounter.  Or, this may just be a way to get me back East so I can pick up my Chihuahua Penny.

The COVID lock-down caught Penny in Florida when I left her with my daughter for what was supposed to be a short visit in March.  Instead, Penny became a long term visitor when I ended up not being able to get back to the Orlando area.  For unrelated reasons, my daughter ended up traveling to Virginia with Penny last month.  Now, I’ll now be able to detour from Ohio to see my daughter and reclaim my dog.  Otherwise, I wouldn’t be able to pick up my furry co-pilot until much later in the year.

Then, back to Montana!  Or, so goes the plan…