Holy Dirt at the Chimayo Shrine 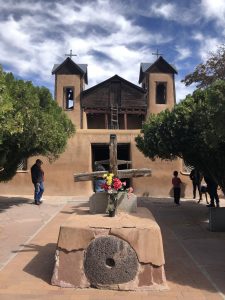 New Mexico offers many pilgrimage destinations.  Saint Joseph’s Staircase in Santa Fe drew me to the state, but I found many other wonderful sites.

In particular, El Santuario de Chimayo, also known as the Chimayo Shrine, attracts seekers of the transcendent from around the world.  Not far from downtown Santa Fe, the Chimayo Shrine rests on a site reportedly considered a source of healing by Native Americans.  A welcoming spirit and uniquely New Mexican art and architecture mark this National Historic Landmark. 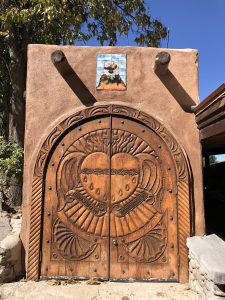 In 1810 a farmer named Don Bernardo Abeyta saw light coming from the side of a hill on Good Friday.  After following the light to its source, he found a crucifix.  The crucifix depicted a dark-skinned Jesus on a cross similar to that of a well-known crucifix in Esquipulas, Guatamala.  The wood of the cross is painted green.  Stylized branches and gold leaves decorate it.  You can learn more about the unusual artistic background of the crucifix here.

Although the crucifix was taken to a nearby church to reverence it, it disappeared and returned to the original site.  After this occurred several times, Don Bernardo Abeyta instead built an adobe chapel above the crucifix’s original location.

El Pocito and the Holy Dirt

Dating back to 1816, the Christ of Esquipulas Chapel still houses the crucifix.  Mass and confession are available.  Through an entrance at the left of the altar, a small side room contains El Pocito, a round hole in the floor from which pilgrims may collect Holy Dirt.

When I visited last fall, visitors crowded into this little room.  They knelt or bent down to scoop Holy Dirt into plastic vials sold by the gift shop or small bags that they brought themselves.  At night, Shrine staff replenish the dirt with more from the mountainside where the crucifix appeared.  A priest blesses the soil before it is made available to pilgrims.  Believers rub the dirt on parts of their bodies in need of healing.

Those who cannot visit the Shrine in person can request Mass intentions, prayers, and even vials of the Holy Dirt on the Shrine website.  I gave several vials away to friends I met in need of healing.  I saved one to give away to my subscribers.  To participate in the random drawing, sign up for my newsletter here if you are not already a subscriber, share a link on your social media to this Chimayo post (or any other you like from my blog!), and email me with a screenshot of your share.  After the drawing, I’ll contact the winner and mail him or her the vial of Holy Dirt. 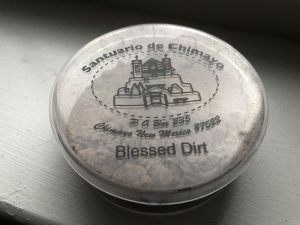 Like Lourdes, but on a smaller scale, the Shrine documents miraculous healings with abandoned crutches, canes and other mementos left by those who experienced a physical cure.  Pilgrims come from all over the world to visit.  Many who linger on the peaceful grounds experience spiritual healing.

To the south of the Esquipulas chapel is the charming Holy Child de Atocha chapel built in 1857.  As I enter, I pass under a seashell carved with crosses above the door.  A wonderful example of New Mexican folk art, the chapel is painted with flowers and hearts and images of saints.  On the peak of the roof, a tin crucifix bears a sculpted heart, echoed in a trio of crosses on top of the adjoining bell tower. 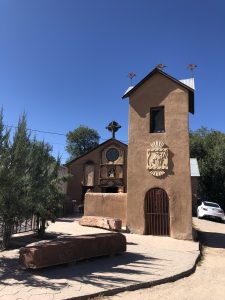 After World War II, survivors of the Bataan Death march started a pilgrimage on foot from Santa Fe to this chapel during Holy Week (the week before Easter).  During their imprisonment they prayed to the Santo Nino (Holy Child) for deliverance.   Today, many pilgrims still make this trip on foot to honor the Holy Child.

I explore other areas within the Santuario grounds.  Although the expansion of the Shrine from the two chapels is not without controversy, the variety of devout images has its own appeal.  Like the New Mexico folk art within the two chapels, heartfelt devotion imbues the colorful images and sculptures.  A new surprise awaits around every corner.

A series of stone crosses stand beside a bubbling creek.  Within each cross, a bas-relief sculpture illustrates the Creation narrative from Genesis. 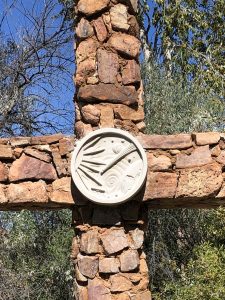 Symbols of pilgrimage abound.  A seashell reminiscent of those from Santiago de Compostela in Spain includes a pair of sandals.  It decorates the base of a statue of Mary.  Nearby, a statue of a pilgrim invites people of the world to visit. 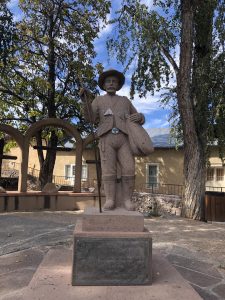 Reflecting the international appeal of Chimayo, a circular pavilion houses an outdoor shrine to Our Lady of Lavang, the Vietnamese incarnation of the Virgin Mary. During a persecution of Vietnamese Christians in the eighteenth century, she appeared to some who had fled into the forest.  At Chimayo, a gleaming white statue honors her.  The altar within the outdoor shrine depicts the loaves and fishes.  The texture and shape of the roof evoke a hat or basket woven from bamboo.

Additional chapels and statues are added regularly.  The Shrine’s expansion is not without some controversy between those who would preserve the original character of the Chimayo Shrine and those who favor broadening its appeal to pilgrims.   Again reminding me of Lourdes, shops in a touristy area outside the Shrine property sell souvenirs appealing to a range of tastes.

Nonetheless, there is a spirit of peace at the Shrine.  God can heal through many avenues.  It is not surprising that people experience miraculous healings through a pilgrimage to Chimayo.  Often the most important kind of healing that lasts through all of time is that of spirit and soul, not physical transformation.

Visit the Shrine at 15 Santuario Drive, Chimayo, New Mexico.  Contact the Shrine office for information about group tours and pilgrimages. 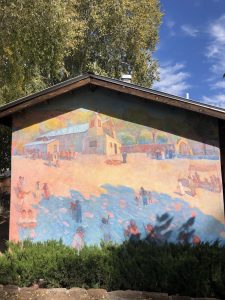 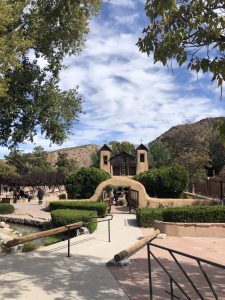 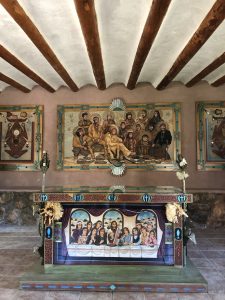