A prayerful Saturday road trip with a friend turned into a visit to the Shrine of Saint John Vianney.  The beauty of pilgrimage is that not only does it benefit the pilgrim, but it can help others. I offered the fruits of this mini-pilgrimage for a priest I know who is battling a chronic illness.

If you are near the DC Metro area, take a scenic drive to visit Saint John Vianney shrine in Charles County MD near the Chesapeake Bay.  Saint Mary Catholic Church in Newport houses the first shrine to honor this French priest in the United States.  Dedicated in 1931 in the historic old church, the shrine moved to the new church and was re-dedicated in 2014.

Tucked away on a road surrounded by farms, Saint Mary Church encourages visitors.  The caretaker Ron was happy to tell us a bit about the history and heartily recommended crabcakes at Cooksey’s, the nearby country store in La Plata. We stopped there and enjoyed fresh sandwiches. Baked goods from the local Amish such as pumpkin squares and Smith Island cake were delicious.

Following our lunch, we delved into history.  Saint Mary’s old church built in 1840 is on the National Register of Historic Places.  Although boarded up, it is fascinating to see the architectural details of this brick church from the outside.  Surrounded on three sides by cemeteries, it is a monument to local history.

As you can read here in more detail, Jesuit priests established the parish in 1674.  It withstood a period of intense British persecution of Catholics before American independence.  Several previous chapels occupied the grounds on which the 1840’s church now stands.  The current “new” church dates to 1954. 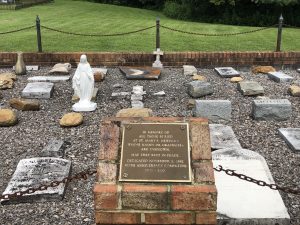 The cemetery in front of the old church contains an unusual Stations of the Cross that almost appear to draw from Japanese art.  In fact, a Boy Scout constructed them a few years ago as part of a service project.  They fit very well within the mix of old and new found at Saint Mary’s. 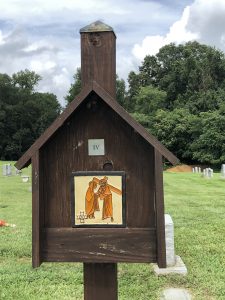 You’ll find the Shrine to the right of the altar inside the new church.  Kneeling in prayer before the statue of Saint John Vianney, one is struck by the intensity with which the eyes appear to be gazing upon you.  Before the statue’s feet lies a beautiful 19th century reliquary.  Learn more about the power of relics here.  This ornate reliquary contains a first class relic of a sliver of the saint’s bone. 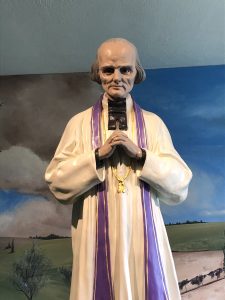 On the church website, you can read about miraculous cures attributed to Saint John Vianney’s intervention invoked through prayer and use of the relic.  A reprint of a devotional brochure from the 1930s contains some of these reports as well as prayers for use by pilgrims.  As a country church, Saint Mary seems a perfect place to honor a saint who served in a country parish.

A Brief Explanation of Saints

Why visit a shine to a saint?  For my non-Catholic readers, saints are those who we believe have made it to Heaven.  After lengthy investigation, the Church officially declares someone a saint based on evidence of holiness and of prayers answered after their death. Or, a saint may be declared as such because he or she is a martyr who died for their faith.

Moreover, all those in heaven are saints.  There are many unknown to us or known only to their families and friends who remember them.  I pray to intercede for the souls of the departed, even when I believe they must be in heaven with God.  In God’s grace, no prayers are ever wasted.  They can go to benefit those who have no one to pray for them.  A holy priest I knew once told me never assume someone does not need your prayers to get to Heaven.  Only God knows us fully.

We can ask the saints to pray for our intentions.  Because the saints are directly in the presence of God without the veil of the material world or Purgatory (a topic for another post!), their prayers are particularly effective.  While many like us were sinners in their life on earth, they overcame their sins by accepting God’s grace to help them work toward holiness.  They now look upon the face of God directly.

That is what we hope for, for ourselves and our loved ones.  We believe in the communion of saints, that saints in heaven are alive and in relationship with us.  They can pray for us and even advise us in prayer as we seek to grow in virtues they mastered over the course of their lives.  In addition, saints serve as models for us based on a saint’s particular interest or characteristic.

In 1925, the Church recognized as a Saint the French priest John Vianney, also known as the Cure’ of Ars after his assignment to a remote country parish.  Four years later, Saint John Vianney was named the universal patron of parish priests.  I regularly ask Saint John Vianney for prayers for priests and those who have not gone to confession in a long time.  His humble and quiet service where he spent hours in the confessional drew many to him during his lifetime because of his holiness. He is a wonderful intercessor for priests and others who experience loneliness, illness, difficult assignments, and other challenges. 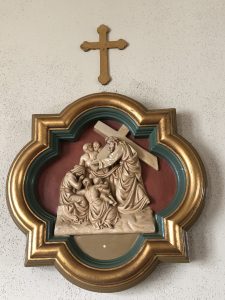 Statues and pictures of Saints are like photographs of our loved ones. They help us to remember them specifically, to visualize them as they lived.  We do not pray to inanimate statues, but use them as a means of focusing our prayers and thoughts.  Like the Rosary or a crucifix, it is not the item itself that has power but the faith it helps inspire in our hearts through the grace of God.  Even Saint John Vianney during his life had a particular devotion to a saint.  In recognition of this, the background of the Shrine mural includes an image of Saint Philomena, a young girl killed during Roman persecutions.  You’ll also find a statue of her with a sweet expression in the back of Saint Mary’s church.

If you visit Saint John Vianney’s Shrine at Saint Mary’s, please say a prayer for my intentions.  In addition to Sunday and weekday Mass, this active parish has many other events (although limited in the time of COVID).   The current pastor writes an encouraging blog and celebrates a monthly Healing Mass with confession. Temporarily suspended during the pandemic, the Healing Mass normally occurs every first Thursday and may resume this October.

As part of your visit, you may wish to allot some time to stop at other nearby historic churches and pilgrimage sites.  Sign up for my monthly e-newsletter so you do not miss forthcoming posts about these! 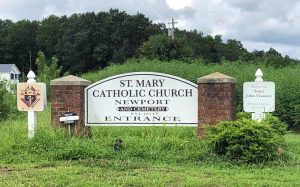