A Fall Full of Angels

Fall is about more than colorful leaves…fall is full of angels.  The Catholic calendar at this time reflects the passing of days into the eternal.

To start, September 29 is the Feast of the Archangels – Saint Michael, Saint Gabriel, and Saint Raphael.  Michaelmas, as this Feast is called in England, traditionally marks the end of the productive farming season.  It signals the beginning of autumn, a time that turns our thoughts to changes in the seasons of life. 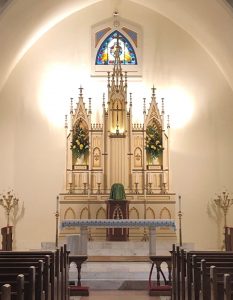 Just a few days later, we celebrate our guardian angels on the October 2 Memorial of the Guardian Angels. We each have our own spiritual being assigned to help us and guard us in our journey through life toward God.   Guardian angels are not just for children, although often depicted that way.  Read more about them here.

Prayers to the angels invoke great powers of protection and healing.  Not surprisingly, many churches honor the angels, from Saint Mary of the Angels in Chicago, to Mont St. Michel Abbey in Normandy France.  Castel Sant’Angelo in Rome, Italy, marks the saving of the city from the plague.  There, an imposing statue of Saint Michael sheathing his sword stands above the round fortress near Vatican City. The statue commemorates a vision of Pope Saint Gregory during a procession asking for an end to the plague.  Likewise, in this time of coronavirus, and any time when disaster, disease, or evil threatens, Saint Michael offers us a powerful intercessor.

Basilica of Saint Michael the Archangel

Last fall, I visited the Basilica of Saint Michael the Archangel in Pensacola, Florida.  Constructed in 1886, this Gothic Revival Church boasts towers with arched windows and doors.  The National Register of Historic Places notes the carved mahogany doors.   Spires top towers of differing heights, visible from most areas of downtown Pensacola. 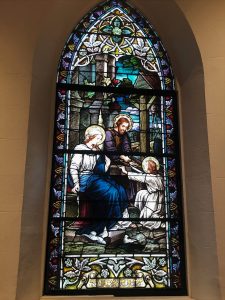 Within the church, original painted stained glass windows illustrate scenes from the life of Jesus and Mary.  Others provide warm personable images of Saints Joseph, Cecilia, Gregory, Aloysius and Patrick.  Manufactured by an art glass studio in Saint Louis, MO, these windows alone are worth a visit.  You can see all of them here and learn more about their history on the Basilica’s website.

Well executed windows focus our prayers on what they depict.  We can imagine ourselves present in the scene and seek to unite our hearts and minds with the lesson taught or virtue shown.  For example, this scene of the Holy Family shows Jesus’ humility as God in learning to be a carpenter from his foster father.  It also affirms the value of work and family life.

One of my favorite windows at the Basilica is a more modern one based on the prayer professing the basic precepts of the Catholic faith.  You’ll find this Apostles Creed window in the vestibule as you enter the church from the street.  The words of the Creed mingle with illustrations. Together, they form a harmonious matrix from which particular words leap out for contemplation.

Saint Michael’s rose window depicts the Basilica’s patron saint.  The original window is full of soft colors that glow from the outside light spilling into the church.  The face of Saint Michael is serenely beautiful.  By contrast, the power of protection against evil shows in the scales of justice the Archangel holds in his left hand, balanced by the sword hilt his right hand firmly grasps. 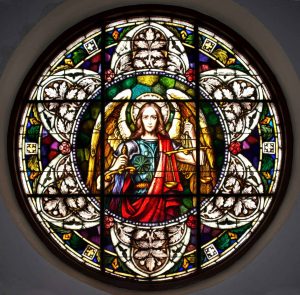 Saint Michael led the heavenly host, the angels faithful to God, in casting out the angelic beings who refused to serve God, but sought power themselves — Lucifer and the demons.  This same battle continues unseen, but manifest, throughout history and even today.  God wins, but we have our own part to play in this struggle.  We can call upon Saint Michael for help.  As the prayer often said after Mass in Catholic churches eloquently states: “Saint Michael, the Archangel, defend us in battle!  Be our protection against the wickedness and snares of the devil.  May God rebuke him, we humbly pray, and may thou, Prince of the Heavenly Host, through the divine power of God, cast into Hell Satan and all the evil spirits who prowl about the earth seeking the ruin of souls.  Amen.”

To encourage devotion to Saint Michael, I’m sharing this coloring page based on the rose window of the Basilica.  Feel free to download and print it for personal use.  If you like coloring pages, my next monthly e-newsletter includes a detailed pen and ink adaptation of a traditional Saint Michael icon for coloring or meditation.  Subscribe here to access it. 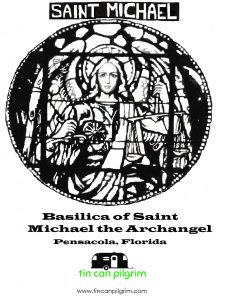