Mardi Gras is the last fling before the penitential season of Lent.  After several weeks, this festival culminates on “Fat Tuesday” before Ash Wednesday, the first day of  Lent.  Due to the pandemic, in 2020 New Orleans’ Mardi Gras became Yardi Gras.  Instead of decorating floats for parades, people adorned their houses.

Likewise, on Ash Wednesday priests practiced social distancing by sprinkling Lenten ashes on penitents’ heads rather than marking a black ash cross on their foreheads. Whatever the form of ash distribution, it is surprising how many inactive Catholics and even non-Catholics embrace that symbol of penitence.

A year before the pandemic, I visited New Orleans during my pilgrimage journeys.  A sprawling city surrounded by and sometimes partially submerged in water, New Orleans clings to where the mighty Mississippi meets the Gulf of Mexico. 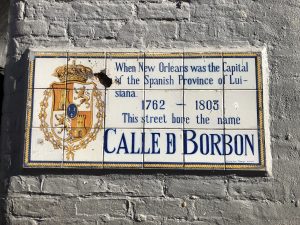 Although the architecture and setting are lovely, Mardi Gras in New Orleans is overrated. I’m afraid my sensitive nose can’t get past the smell of urine and stale beer in the streets. Also, averting my eyes frequently from views I don’t want to see gets tiring.

Nonetheless, New Orleans contains many treasures for the pilgrim and for those interested in history, music, and delicious cuisine. Picking out the gems while leaving the rest is the trick.

One such gem is the Cathedral-Basilica of Saint Louis, King of France.  Overlooking Jackson Square in the heart of the French Quarter, the elaborate cathedral boasts three spires topped with crosses. The oldest continually active cathedral in the United States, the original building was built in 1727. After a fire destroyed the first building, the current structure was completed in the 1850’s.

Inside, two rows of flags line the central aisle.  Four statues of angels hold up the Rococo style gilded altar from Belgium. In the painting above the altar, King Louis announces the Seventh Crusade. Beautiful stained glass windows depict events in the life of the saint. Finally, more paintings and bas relief sculptures adorn the roof. It truly is a feast for the eyes.

As I walk from the Cathedral back to where I parked, I notice a large statue of Saint Jude along Conti Street. He appears to be strolling just inside a wall bordering Our Lady of Guadalupe Church. At first, I think the saint is holding a walking stick.  Later, I learn it is a club representing the one with which he was beaten to death for his faith. A characteristic flame wrought in stone waving over his head represents the descent of the Holy Spirit upon the apostles at Pentecost. This 17 foot tall statue that towers over the wall may be the largest Saint Jude statue in the world.

Our Lady of Guadalupe Church

Our Lady of Guadalupe Church contains the International Shrine to Saint Jude. Built in 1826 to bury victims of the yellow fever pandemic, it is the oldest surviving church in New Orleans. Now it is the official chapel of the New Orleans police and fire departments. Several times a year a Novena (a series of prayers over nine days) for the intercession of Saint Jude takes place.

Inside, a beautiful white altar features an image of Our Lady of Guadalupe.   The elaborately painted wooden ambo stands out against the simplicity of the pale cream walls and warm brown marble floors.

The Saint Jude shrine is lined with candles and contains a colorful statue of the saint in front of a detailed mosaic depicting the Most Holy Trinity — Jesus, God the Father, and the Holy Spirit.  Angels and representations of  people of all races complete the mosaic.  On the opposite side of the main altar, another lovely chapel to Our Lady of Guadalupe contains a similarly styled mosaic featuring Our Lady of Hope.  Just outside the church is a replica of the Grotto of Lourdes.

Behind the church, sepulchers and above ground vaults in the historic Saint Louis Cemetery No. 1 further illustrate New Orleans’ rich history. Voodoo priestess Marie Leveau’s tomb is there, as she was in later life known as a devout Catholic who practiced works of charity. Homer Adolph Plessy, who challenged racial segregation on railroad trains, rests in a vault within the cemetery. Plessy lost his challenge in the infamous Plessy v. Ferguson case in which the United States Supreme Court upheld the “separate but equal” doctrine the Court overturned decades later in Brown vs. Board of Education.

Our Lady of Prompt Succor

My third stop on my one day pilgrimage was a quick visit to the National Votive Shrine of Our Lady of Prompt Succor – or “quick help”. I have a particular devotion to this image of Mary based on my experience on a highway in New Mexico. Our Lady of Prompt Succor is the patroness of the City of New Orleans and Louisiana. The Shrine is located at the Ursuline Academy, the oldest school for girls in the United States.

The Shrine’s history is associated with two miracles. First, on Good Friday in 1788, the Ursuline nuns and city residents prayed for safety from a large fire raging through the city. The wind changed direction, and the flames stopped short of the convent. Second, in 1815, the prayers of the sisters and many New Orleans residents again were credited with diverting disaster. The vastly outnumbered forces of General Andrew Jackson defeated the British Army’s attack on New Orleans, supported by prayer vigils from the Ursuline Convent Chapel.

Before leaving New Orleans, I found that even Mardi Gras has its gems. I enjoy a good parade and I love dogs. So, I had to attend the Barkus Krewe parade that danced along the streets celebrating canines decked out for the event. I didn’t bring Penny because she would have not liked the crowds, but she might have fit right in at the Chihuahua float.

As you’ll learn quickly in neighboring Alabama, Mardi Gras actually originated in Mobile, not New Orleans. At the urging of my fellow campers in Robertsdale, Alabama, I attended a Mardi Gras parade in Mobile. 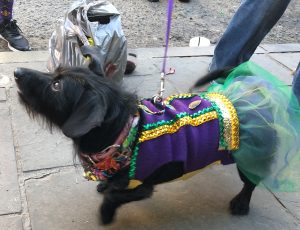 By contrast to New Orleans, Mobile’s parade had a family feel to it  Small kids perched on parents’ shoulders and people in general wore more clothing. Friendly crowds shared the items they caught from the gleeful folks throwing them from the floats. I ended up with a bag full of moon pies and several bead necklaces. The small toys and stuffed animals that came my way I gave to children near me after checking with their parents. Even the office buildings were decorated in Mardi Gras colored lights.

As I drove back to my campground, I wondered how many of the people out celebrating in the streets were preparing for Lent. Was it just a party or a last time to enjoy things they would refrain from for forty days?

Lent is remarkably productive spiritually when used as an opportunity to pray more, give more, and deny ourselves things we’d otherwise enjoy. “Giving something up for Lent” should not be done out of a sense of self-hatred, a desire to prove you can tough it out, or as a seasonal diet.  Rather, it is a way to establish good habits of moderation and self-control by deliberately denying yourself something that is in itself good for a greater good.  That is, we do deeds of love to grow closer to God. 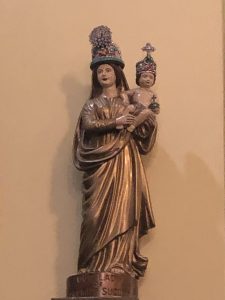 If you are contemplating a Lenten sacrifice, this video from Father Mike Schmitz may help.  You can offer your Lenten penances for particular intentions or simply unite them with God’s will, which always is for our ultimate happiness and good.  However, keep in mind that Lenten mortification is meant to mortify yourself not others.  For example, giving up coffee is a bad idea for me as it makes me terribly grumpy.

Ultimately, Lenten sacrifices, like core exercises and stretches that prepare us for weight lifting or cardio, strengthen us for other sacrifices. Denying oneself a small pleasure such as fancy latte drinks or ice cream helps increase moral strength to give up bigger things, like being critical of others and jumping to conclusions.  Growth in kindness and holiness is the best Lenten fruit, leading us to Easter and a closer relationship with God.

Free Lenten resources available online can help you journey through Lent.  For instance, the Saint Josemaria Institute has a series of weekly Lenten reflections and podcasts.   Many dioceses connect parishioners to the Augustine Institute’s Catholic media platform FORMED.  During Lent, FORMED offers daily reflections emailed to your in-box.   Dr. Tim Gray comments on the daily Mass readings and how you can apply them to your life.

For a more in-depth approach, the Saint Paul Center for Biblical Theology has a free ten session bible study course by Scott Hahn called “Parousia:  The Bible and the Mass.”  Another option is short meditations from Bishop Robert Barron on the daily Gospel readings.  Also, you may like a free Lenten e-book or weekly email with meditations written by Father Joseph Mary of the Eternal World Television Network.  For the audiovisual penitent,  Dynamic Catholic provides free daily videos during Lent.

In any event, be assured of my prayers for a productive and blessed Lent!  May next year find us able to travel in person to the sites I visited last year.

If you liked this post, subscribe to my e-newsletter so you don’t miss future posts.  If  you’d like to learn more about Tin Can Pilgrim’s mission and support it on Patreon, here’s the link.