Nicknamed “Nation’s Oldest City,” Saint Augustine is the oldest continuously occupied European settlement in the continental United States. After an arduous sea voyage, Spanish explorer Pedro Menendez and his companions spotted land on August 28, 1565.  Since that date was the Feast of Saint Augustine, Menendez named the settlement he founded after the saint. Upon embarking, the priest accompanying them celebrated the first Mass in the New World in thanksgiving.

My first stop was at the site of the landing and first Mass. The Nombre de Dios Mission and Shrine, just off Ocean Avenue, looks out over the water. Highlights include the Our Lady of La Leche National Shrine chapel. This simple, ivy covered chapel contains a statue depicting the Virgin Mary breastfeeding baby Jesus. Pilgrims seek the intercessory prayers of Our Lady of the Milk and Happy Delivery for their marriage, children, and safety in birth.

A replica of the shrine statue is found inside the modern Prince of Peace Catholic Church. Constructed of coquina, a stone made from compressed small clam shells, this church accommodates larger groups of pilgrims.

Also within the Mission grounds, a stainless steel cross over two hundred feet tall marks the site of the first Mass. The “Great Cross” commemorates the 400th anniversary of the city’s founding.  I’ll post my pictures from Nombre de Dios later, pending permission I requested from the Diocese of Saint Augustine. 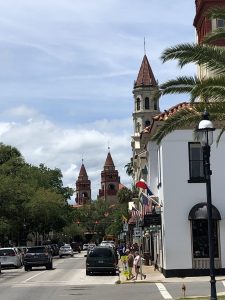 In the middle of it all, the Cathedral Basilica of Saint Augustine surveys the heart of Old Town. The Cathedral’s white façade and Spanish style red roof tiles contrast with green palm trees and the blue Florida sky. Inside, the Spanish influence continues with elaborate metal grillwork.  Dark wood beams painted with saints, flowers, ribbons, and scrolls criss-cross the striking red and gold ceiling. In the front of the Cathedral, organ pipes surround a magnificent silver and gilt altar. 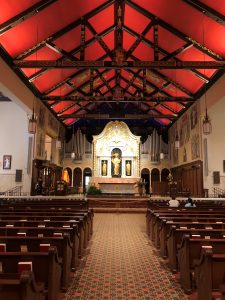 Dating to 1797, the current Cathedral stands on the site of three previous churches. Its bell tower is a landmark in the Old Town area.  The ornate tower contains what may be the oldest church bell in the United States.

Chrism Mass at the Cathedral

For me, the best part of my visit to the Cathedral was that it took place at the Chrism Mass. Often held on the morning of Holy Thursday just before Easter, the Chrism Mass expresses the unity of parishes and priests with their Bishop. During the Mass, the Bishop blesses oils used for Baptism, Confirmation, Anointing of the Sick, and Holy Orders. Each parish receives a supply of these holy oils for the year from the Chrism Mass. In addition, the priests of the diocese renew their vows during the Chrism Mass. They prostrate themselves before the altar to renew their oaths of fidelity to their bishop and to Jesus Christ.

That morning, hundreds of priests from all over the diocese entered the church in a seemingly endless procession led by Bishop Felipe J. Estevez.  Witnessing so many devoted to serving Christ with their lives inspired me to pray in thanksgiving for their vocations.

During his homily, the Bishop spoke about the need to pray for the faithfulness of priests. All the ordained, he urged, must seek the power of the Holy Spirit to sustain them in their vows of celibacy and obedience. That faithfulness, he preached, needs to endure through love and fortitude, despite the scandals and ongoing purification of the Church. 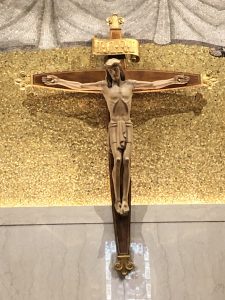 Thus, the Chrism Mass reminded this pilgrim of the living nature of the Church. The Cathedral is alive with the Holy Spirit, a living legacy, not just a place to visit for beauty and history.

After Mass and a fabulous lunch at a seaside restaurant, I returned to further explore and reflect upon the details inside this lovely Cathedral. A shrine to Saint Patrick honors the many Irish religious who have served the parish. Green tile and marble evoke Ireland. The tiles tell the story of Saint Patrick’s life. 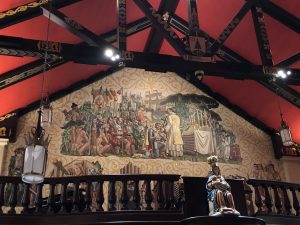 In the rear of the Cathedral, the choir loft balcony contains a seated statue of a crowned Mary tenderly gazing at the infant Jesus whom she holds in her lap. Elaborate paintings on the back wall of the loft depict the history of the city of Saint Augustine, including the landing of Menendez. The same dark wood in the balcony railing as that used in the decorated ceiling beams sets off the vibrant paintings. 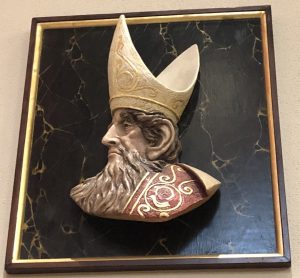 Throughout the Cathedral, beautiful stained glass windows dating from 1909 tell the story of Saint Augustine’s life. A gilded statute of the saint elsewhere in the church contains one of his relics. A more modern representation appears to have the Saint peering out at the visitor from the wall. 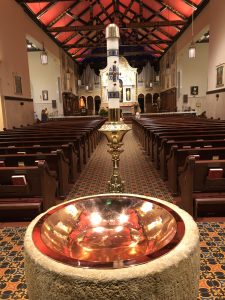 Finally, the circular baptismal font replicates the font in which Ponce de Leon was baptized. Its polished interior reflects the brilliant colors of the ceiling above.

Saint Augustine famously penned the prayer “Our hearts are restless until they rest in You.”  In the shrines and Cathedral named for this saint, your heart indeed will find rest. I look forward to returning to Saint Augustine to experience more of this lovely city and its rich heritage.

If you enjoyed this post, please consider supporting my efforts on Patreon and follow Tin Can Pilgrim on 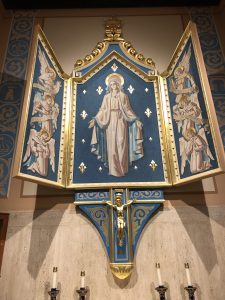 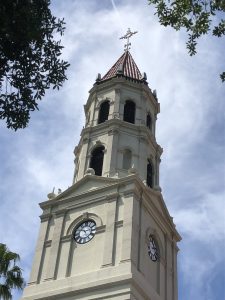 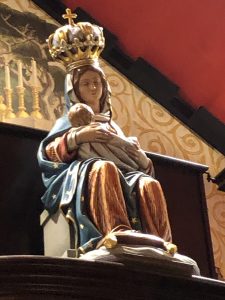