NYC’s 9/11 Memorial Speaks to the Pandemic

As the twentieth anniversary of 9/11 approaches, I recall my visit to New York City two years ago. The 9/11 Memorial and Museum – and the nearby churches – struck me with the enduring heroism and sacrifice of 2001.  Two decades later, the coronavirus pandemic calls for sacrifice and heroism in different circumstances. Yet, our memories and the lessons of the past inspire our approach to the future.

I dropped my kids off at school on the morning of September 11. As I drove home, I enjoyed the bright clear blue sky and perfect fall weather. Then, I heard on the radio that a plane had struck one of the World Trade Center Towers. My sister used to live in Battery Park City with a view of the Towers, and I’d been there many times.

By the time I arrived home and turned on the TV, it was clear this was not an isolated accident. Soon, news of the Pentagon strike and a frantic call from my husband who was at the Capital in DC made it even more personal. I watched in horror as the Towers collapsed. While my immediate family and friends were safe, many others were not.

As the days passed, the impact became more immediate. When I returned to work in DC the next day, I saw black smoke still rising from the Pentagon as I drove over the Memorial Bridge. One of my friends and colleagues at work suffered the loss of a dear friend of hers whom she came to know when they both adopted children from China. She asked for my prayers for her. I’ve prayed daily for Carol Demitz ever since.

When I visited the 9/11 Memorial in New York City, my first stop was to look for Carol’s name. As I learned more about her in the museum exhibits, I prayed again for her. I hope that one day we will meet in the eternal glory of God.

I reflected then, and now, how this individual is only one of so many. Grief is not abstract; it is personal. Even though I didn’t know Carol, and I don’t know directly anyone killed by coronavirus, each person is a precious and unique individual loved by their families, friends, and Creator. Like thousands of others, then and now, Carol Demitz left behind a family and friends forever impacted by her sudden loss.

Why does God allow such suffering? Our faith gives us answers and a reason for hope. For those without faith, suffering seems a confirmation there is no God, or, at least, that he is a cruel and indifferent god. That despairing version is not the true God. God loves us so much that He sent his only son, fully human and fully divine, to share in and redeem our suffering. God allows suffering because He gave us free will.

Ultimately, God turns evil that comes from our misguided choices to our good.  As a good and loving Father, he seeks what is eternally good for us. God wins, not evil, and He welcomes us into that victory by living through us, in us, and with us.

From this perspective, the 9/11 Memorial is a holy site.  My visit was a pilgrimage to honor and pray with reverence for the victims and survivors.

In the busy city, near Wall Street, a reverent hush descends as you enter the World Trade Center plaza. Waterfall pools of black and grey granite cover the footprints of the North Tower and South Tower. The names of those lost are inscribed on the surfaces of the grey granite. On each victim’s birthday, the caretakers of the Memorial insert a white rose in a crevice at the person’s name.

Groves of trees memorialize responders and recovery workers, survivors and community members, who suffered chronic illness and death following the attack on the Towers, due to toxic fumes and other hazards.  You may come across the “Survivor Tree,” the lone tree from the original World Trade Center plaza that somehow sustained the blasts.  Volunteers tended to its damaged roots until new sprouts burst forth as a testament to life.

Between the pools, the mainly underground 9/11 Museum breaks the surface of the plaza in an angular glass-faceted pavilion.  It reflects the sky, trees, and surrounding buildings.

Inside the Museum, it is somber.

As I explore the hallways, some of the exhibits bring me to tears. I read about Carol’s life and the impact of her death, along with the stories of many others. The twisted wreckage of a fire engine fills me with wonder and gratitude as I marvel at the bravery and love shown by those who sought to help others at the peril of their own lives.  The Vesey Street stairs on which many fled to safety and a portion of the original slurry wall from under the Towers also inspire reflection.  Find what moves you when you take a virtual tour of the Museum on the 9/11 Memorial and Museum website.

After I emerge into the light of the plaza from the museum, I walk in the surrounding neighborhood.  Here, too, the impact of 9/11 is strong.

Like a giant white dove, the Oculus or new World Trade Center Transportation hub spreads its wings across the street from the eastern border of the plaza. The startlingly bright white lines evoke the essence of a plane stripped bare of its exterior, down to an exoskeleton. It is a truly beautiful building, fixed in a moment of flight, surrounded by the skyscrapers of commerce.

Designed in remembrance of 9/11, the light- filled building houses commuter train entrances.  From the inside, one feels as if one is looking out through the scoured clean ribs of a majestic whale.

Churches near the World Trade Center served those who worked in the Towers and surrounding buildings. They sheltered fleeing victims and gave water and food to exhausted first responders. With a seemingly endless series of funerals, they buried many of the victims.  in their steadfast response of love, these churches were then and are now beacons of hope and resilience.

Outside of St. Peter’s Church you’ll find statues created by artist John Collier to honor heroes of 9/11 and inspire hope.  These include Saint Joseph, as the patron of construction workers, holding the tools of his trade; Saint Michael the Archangel, patron of police, wrestling with Satan; St. Florian, patron of firefighters, lifting a bucket and St. Mary Magdalene, first witness to Christ’s Resurrection.

Inside, there’s a mural depicting beating swords into ploughshares.  Above the main altar rises a beautiful iconic image of Christ.

St. Peter’s was a staging area for relief efforts during 9/11.  Part of the landing gear of the plane that hit the South Tower pierced its roof.  Firefighters reverently laid the body of their chaplain, Fr. Mychal Judge, at the altar of St. Peter’s after he was killed in the collapse of the North Tower.  You can read more about Fr. Judge and the sustenance provided by St. Peter’s during the recovery efforts here.

Nearby, you may wish to visit St. Paul’s Chapel, two blocks east of the 9/11 Memorial.  Miraculously, it suffered no damage and was able to feed and supply rescue workers in the immediate aftermath of 9/11.  As part of Trinity Church, you’ll find a lot of interesting history here — even a visit by George Washington!

On the southern edge of the Memorial plaza, the Byzantine dome of the Greek Orthodox St. Nicholas Greek Orthodox Church and National Shrine rises to invite worshipers.  It replaces a small Greek orthodox church destroyed by the collapse of the South Tower.  It is still under construction, but the church’s website has an extensive virtual tour.  While I’ve not yet visited either St. Paul’s or St. Nicholas, they are both on my list for when the pandemic subsides and I visit New York City again.

After leaving the 9/11 Memorial and Museum, I suggest you stop by one of the neighborhood churches to pray. Perhaps offer your participation in Mass or another devotion for the peaceful repose of the 9/11 victims and for comfort and peace for those who miss them. In this way, you can turn to good purpose the grief and sadness of remembering the 9/11 tragedy.

As in the aftermath of 9/11, the recent tragic losses in Afghanistan and  suffering due to the COVID-19 pandemic today can turn us back to God for healing and hope. Just as 9/11 tested and confirmed the faith of many, the pain and loss we experience now can lead to a renewal of faith. 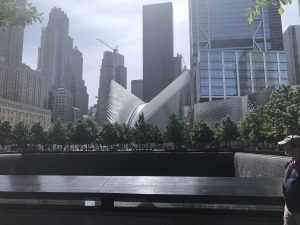 After 9/11, many people in New York City found that the words of Psalm 46 spoke directly to their situation, giving them comfort and suggesting the city would prevail.  As this interview from Journey TV discusses, David Van Biema, a prominent religion journalist, became interested in writing about the Psalms because he felt as if someone were talking directly to him in Psalm 46.  For this reason, he wondered what other Psalms had to say and how they might talk to others.

Finally, as you make your virtual visit to the 9/11 Memorial and surrounding area, may you find a Psalm or other prayer that, like this one, speaks to you about endurance and hope in the present difficulties:

God is our refuge and strength, a very present help in trouble.
Therefore will not we fear, though the earth be removed, and though the mountains be carried into the midst of the sea;
Though the waters thereof roar and be troubled, though the mountains shake with the swelling thereof. Selah.
There is a river, the streams whereof shall make glad the city of God, the holy place of the tabernacles of the most High.
God is in the midst of her; she shall not be moved: God shall help her, and that right early.